Arrival of the new Tamar Class Lifeboat at Shoreham.

Hello and welcome to my blog. It's lovely to see you again and a thousand apologies for having gone AWOL for a few weeks.

I promise I've not been lolling around drinking coffee. Nope, I've been busy. Firstly, I completed an excellent course on play writing with New Writing South and have until February to draft a full length stage play; secondly, I've re-written the memoir of 95 year old Bill Earl, a Nursing Orderly during the Second World War; and lastly, I've been planning more blogs.

Hence this afternoon I joined a small frozen crowd who had turned out to greet our new Tamar Class Lifeboat, Enid Collett, which replaces the Hermione Lady Colwyn, an older Tyne Class Lifeboat which had rescued 458 people during her 19 years service. 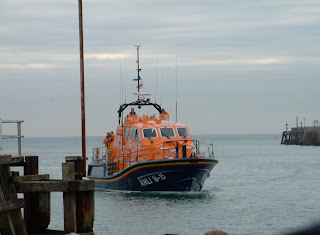 The Tamar Class is the most advanced All Weather Lifeboat in the RNLI fleet, and she was escorted to the station by a small flotilla of lifeboats from Newhaven, Brighton and Littlehampton.After she'd gracefully manoeuvred herself into position, she was winched up the slipway to her new home. However before she'd even had time to unpack, she was out again and, much to our delight, was launched into the harbour.

I'll be dedicating a blog to the Enid Collett and our new Lifeboat station in the New Year, but in the meantime, I hope you enjoy the clip.

I'll definitely see you next week, when I'll be bringing you festive messages from some of the people featured during 2010.

Thanks for popping by and ta-ra for now.
Posted by Liz Coward at 00:23