A day in the life of an airline pilot 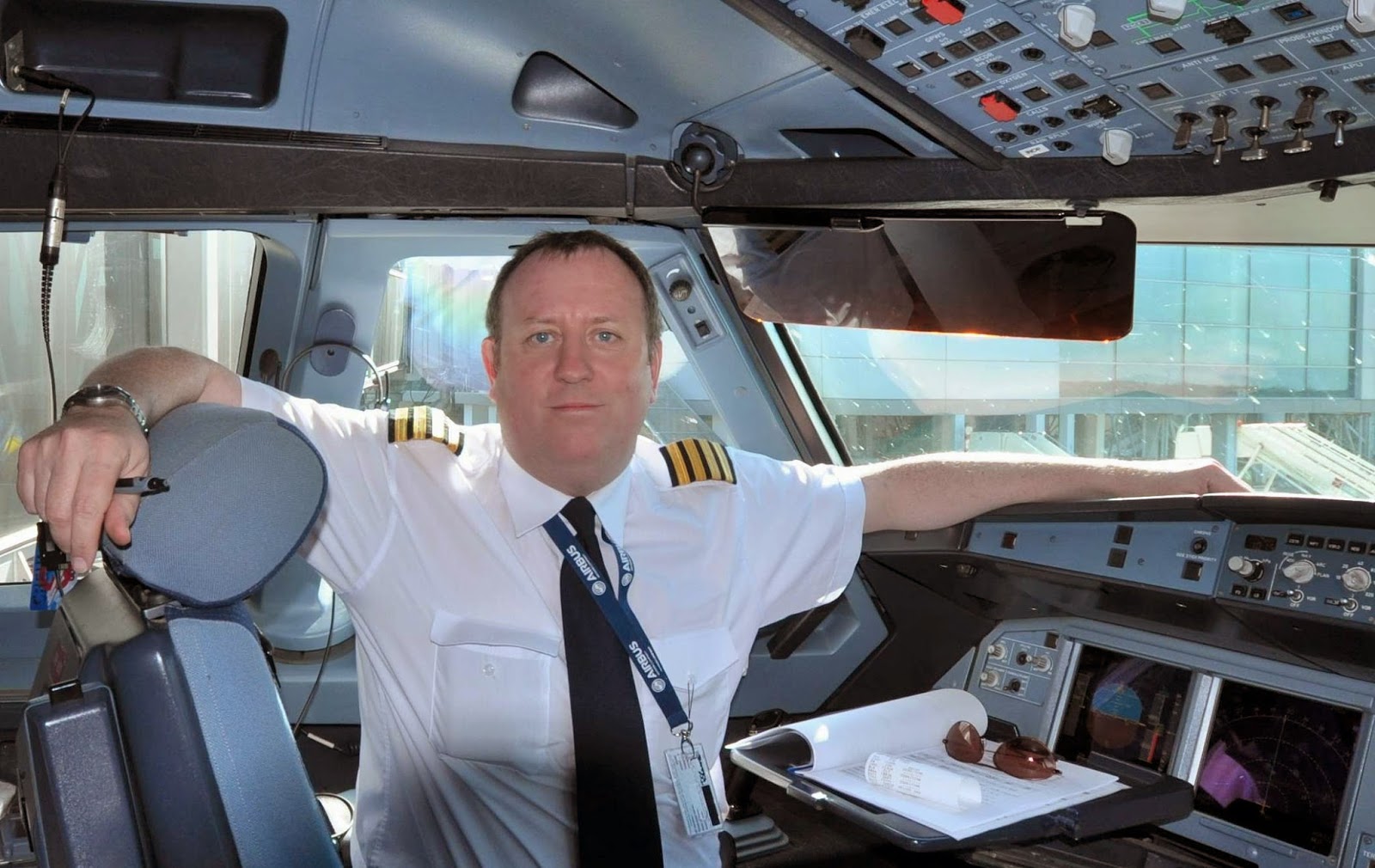 Richard Coward is a Training Captain on the Airbus A320.
He has 30 years flying experience and lives in Shoreham with his wife and son.

“I’m a freelance Training Captain and I train pilots across the world, either in the simulator or on the line. I’m currently training Serbian pilots on the line, so I’ve been seconded to the airline to train them whilst we are flying the normal passenger schedule.
I normally check-in an hour and thirty minutes before the scheduled departure time and meet the other pilot. This is often the first time we’ve ever met, but together we’ll go through the paperwork, such as flight plans, weather, and NOTAMS.
The flight plans include the expected weight of the aircraft; how much fuel we’ll need; the route that we’re taking; how long that’s going to take; how high we’ll be flying and at what sort of speed. We’ll look at the weather so we can plan ahead and avoid things like thunderstorm clouds. We read the NOTAMs, Notice to Airmen, which gives us information about what's not available at the airport or en-route, for instance, to avoid a certain area because there’s an airshow or a military exercise.
Some airlines also provide a maintenance state of the aircraft, so we’ll check that and make allowances for defects. A typical example would be if they’ve de-activated a brake on one of the wheels. We’ll still have three, but it will effect the takeoff and landing performance.
After we’ve gone through the documents, we'll meet the cabin crew and give them the information about the flight and then about an hour before departure, we'll go out to the aircraft together.
When we get on the flight deck, we’ll put all the data into the onboard navigation computers. We'll ensure that every bag is loaded and in the right place, check that there’s enough fuel and that there are no further technical problems with the aircraft. Once the crew has confirmed that everyone is onboard and it is secure in the cabin, the final bit of paperwork is signed and left behind. Then we'll close the door and go on our way.
During the flight, we'll record our flight time and note the time and fuel as we pass waypoints. We'll check the weather ahead, look out for other aircraft and talk to Air Traffic Control. As a training captain, I’ll look at the pilot’s training file to see what subject matters we need to talk about, plus, at some point, we'll have to eat and drink.
When we finally get to our destination, they’ll be more paperwork and we’ll refuel and stretch our legs while the aircraft is cleaned. Once the passengers and bags are loaded, we’ll be off again. For short-haul operations, the typical turnaround time between landing and taking off is usually about 45 minutes and crews will do between two and four flights a day.
When we get back to base, the aircraft will usually be handed over to the engineers. If there have been any problems we'll have recorded them in the technical log, then it’ll be back to the office for another 30-40 minutes to do the final paperwork. It’s a long, long, day and tiredness and fatigue are major concerns in the industry.
Our overriding purpose is to operate safely, and modern pilots are more like flight safety managers than they’ve ever been before, so there’s been a much bigger drive towards managing our temperaments.
Our temperament has to be tailored towards being safe, and once safe, to follow the law, then  passenger comfort comes next. If your temperament is such that you’ll always put the law or passenger comfort first, and risk safety, it'll start going wrong. We’ve seen this over and over again in accident reports.
To operate safely, we also have to make sure that the crew work as a team. The crew, which includes us, may not even know each other when we check-in, so the Captain has to break down barriers quickly to create that team.
The beauty of the airline industry is that the crew are all trained to follow the airlines' Standard Operating Procedures, (SOPs), and they are followed, to all intents and purposes, every day. Therefore, if a crewmember, regardless of whether they are new to the job or have 20 years experience, decides that something isn't right, they should go and inform somebody. Whether or not they do, depends on whether there is an environment of equality, trust, and support onboard.  Unfortunately, failures to follow SOPs sometimes go unchallenged and it's usually for cultural reasons. For instance, I’ve been in Asia and seen a Captain make a mistake. The first officer spotted it too, but didn’t correct him because it would have caused the Captain to lose face.  In Eastern Europe, the prevailing attitude seemed to be that if somebody had out ranked you in the military, they believed they were right and expected you to follow their lead, irrespective of your position in the company. Cultural issues like that should never interfere with flight safety and it’s one of my jobs to make that clear in a culturally sensitive way.
Most pilots have a passion and pride about flying, but it’s not the healthiest of jobs and the closest thing I’ve got to a bedtime routine is, get undressed, wash teeth, check time of wake up call and crash out. Even if it’s 2 o’clock in the afternoon!”

I hope you found that interesting. Thank you Richard for contributing to the series and thank you for dropping by. I'll see you next week with another "day in the life of."
Posted by Liz Coward at 22:28