Hello and welcome to my Birthday blog. It's lovely to see you again.

Now that I'm comfortably settled into middle age, it would be rude not to have a moan, so mine is about screens. I'm not fussy which ones; computer screens, mobile phone screens, DS screens, TV screens, all types of screens really, except windscreens. I don't mind them.

This is what I think of screens... 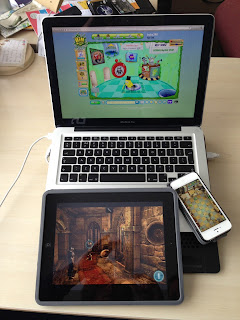 
I don't mind kids having a play once in a while. No harm there.

I do mind kids who consider it their birthright to play on a screen of their choice, whenever they want, wherever they want, for as long as they want, regardless of sunshine, school, friends, family or their own welfare. I also mind when it reaches a stage when screen time is the only currency with which they will negotiate, and the only thing that will transform their behaviour.  I mind because we've got one just like that and he's only 8-years-old.

Now, I confess I gave screen time as a reward during the summer, because it meant that the piano and french practice was done without argument. Then, one day, I realised that what I was doing, giving 30 minutes screen time for 15 minutes homework, was like feeding sweets to a sugar addict.

The day itself started just like any other. Tom got up at sparrow's yawn, stumbled downstairs, watched TV, pinched a cheese string and waited for me appear. An hour later, I bustled downstairs, fed the cat, cleaned the cat litter, made breakfast, put on a wash, and launched an investigation into the disappearing cheese strings. Halcyon days.

Evening came, and I thought Tom was very sensible when he took himself off to bed early complaining of exhaustion. I sang "All through the night," tucked him up, and quietly shut the door. It did not remain shut for long. First one, then two, then three, four, five visits to the loo. This unusual behaviour was treated with motherly concern; could it be undiagnosed Type A diabetes?

It didn't cross my mind that he had an ulterior motive, either then, or when he repeatedly asked us what time we were going to bed. When the time came, I saw that his light was still on. As I opened his door, I glimpsed him stuffing something under the pillow. He stared at me with tired, bloodshot eyes and whispered that he had a nightmare. After a quick exchange, along the lines of, I wasn't born yesterday, he removed the pillow to reveal my computer underneath.  AND it was hot. It was immediately confiscated, he was instructed to GO TO SLEEP, and we went to bed.

In the middle of the night, nature called, and in the dimly lit bathroom I noticed a throbbing red glow from the laundry basket. I briefly imagined that the Devil had moved in with our smalls, but closer examination revealed a Nintendo 3DS. No diabetes then.

With the screens recovered, I pondered that our 8-year-old had feigned exhaustion, sneaked around, pinched the screens, and forced himself to stay awake so he could play on them. With the clarity of thought that only comes at 3 a.m, I concluded that our offspring had become a screen addict.

It didn't go down too well. It still doesn't, but we are resolute.

1. We have called it by its real name. The house has become The Priory and he's going cold turkey.
2. We have deleted the games surreptitiously loaded onto our phones despite taunts that we didn't know how.
3. We have changed the passwords on all phones and computers, and changed them again when he guessed them.
4. We have kept them out of sight. Hiding the TV was a bit tricky, but the remotes were manageable. Best bit was switching the TV onto the jewellery channel first.
5. We have put the DS in the loft. Can't find it now. That's the reason why it's not in the photo.
6. We have restricted the use of the computer/iPad to 10 minutes a day and timed it. Sadly we had to build in slippage time.
7. We have told him that the ipad has a motion alarm... only partially successful.
8. Pleas from Club Penguin, Moshi Monsters, Bin Weevils and all his mates, for Tom's account to be activated, have been ignored.

Of course, we still have the daily requests to play on a screen, followed by pleas or cries of indignation. We still have foot stamping refusals to do what asked unless it's rewarded with screen time. We can't restrict his use of screens at his friends houses, but he's only 8, so we can restrict where he goes.

The tyranny of the screen has been broken, for the moment. Tom has re-acquainted himself with his lego, reading, drawing and the piano. We no longer leap up suspiciously when Tom wanders upstairs and best of all, we've realised that we are not the only parents battling the scourge of the screens.

It was so much simpler in my day. All my parents had to contend with was mud!

Thanks for dropping by and I shall look forward to seeing you again next week.  Until then, take care of yourselves.