What makes us Human? written by Alison Lapper with Liz Coward

Hello and welcome to my blog. It's lovely to see you again for, what is, an EXCLUSIVE issue.

As you know, months ago, Alison Lapper commissioned me to co-write her essay on What makes us Human? for BBC Radio 2 Jeremy Vine show. Excitement didn't come close and I quickly set to work.
Ali and I bashed ideas around over lunches and coffees. We wandered down some blind alleys, but eventually there was enough material for me to get my teeth into. After watching The Elephant Man and listening to earlier speakers, I was ready to show Ali the first draft.  She liked it a lot and it gave us something to work on. A few drafts later, the job was complete and last Wednesday it was time to deliver.
After umpteen read throughs, we had one last practice on the train up to London. Alison read it beautifully despite her dyslexia and the distraction of a ruler, which kept her eyes focused on one line at a time.
Even before we left Shoreham, she was nervous.  BBC Radio 2 gets over 13 million listeners, and the last time she spoke to Jeremy Vine they had had a run in. Moreover, the format of essay then interview, meant that she would be playing to her weaknesses before she could play to her strengths.
Nerves worsened when we got into the studio because the microphone impeded her view of the essay. We'd spent hours practising. We'd fine tuned the text. We'd highlighted words in bold so they were clearer. We'd increased spaces, even changed what" to "wot." We'd done too much to be thwarted by a mere microphone. However, there was no time to worry, for moments later Ali was live on air. 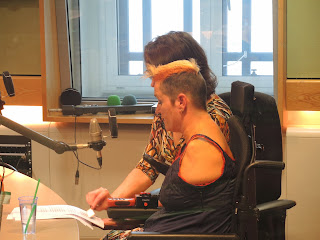 Slow and steady. Line by line.

The problem with this question is that you have to find universal characteristics that link people like Hitler with Mother Theresa.
I could have a stab at it and say, freedom of choice, and the desire to humanize everything, but an Anthropologist may hiss, “What about X?” A human rights campaigner may snap, “Saudi Arabia huh?”  And you’ll always get that plonker who’ll yell,  “You don’t even look human love, so how can you talk?”
However you cut it, humans are incredibly different, so this is a nightmarish question, unless you are an expert, of course.  But I’m only an expert on my life, and the challenges disabled people face.
Based on that, I think there are four vital things that make us human, the need to love, the need to be loved, and the need to be accepted and respected as a human being in the first place.
In the introduction to this series, we hear some lines from The Elephant Man.  John Merrick said them when he was chased into a railway toilet and trapped between two rows of urinals. With his back against the wall, he screamed at the mob, “ I am not an animal!  I am NOT an ANIMAL! I am a human being!” and of course he was.  But to be treated like a human being, you have to be accepted as one.
When I was trapped at Chailey, I was too afraid to scream, but then, I was only tiny and didn’t even know that I was different.  I understood that I was one of the 250, “strange little creatures,” that lived there.  But we were in the majority, so acceptance wasn’t an issue.
It only became an issue when we were faced with the outside world.  That was a whole different ball game.
As toddlers, we were taken to Brighton Beach, and we emptied it in 10 minutes because people dragged their kids away.  They said we were disgusting and shouldn’t be allowed out.
We were never asked if we minded being repeatedly sprawled naked in front of 10 to 15 medical professionals, and endlessly poked, pulled, rotated and photographed.  Every Wednesday afternoon, wealthy donors would peer at us through the classroom windows.  They didn’t seem to see children, just poor, pathetic, unloved creatures.
Although we’ve come a long way since then, I’m still stared at.  Some passers-by will do a double-take if I’m heard making an intelligent comment.
I’m told I intimidate people.  I make people feel uncomfortable, or even turn their stomachs.  Why?  Disabled people aren’t a different species.  We are human beings with the same needs and aspirations as everyone else, and everyone has a basic need to be accepted.
I think that is why John Merrick said to Treves at the end of the film, “My life is full because I am loved.” Now he could die in peace.  Society had finally accepted him for wot* he had always been, a human being who just happened to be disabled.
Merrick also mentioned love, and I believe that loving, and being loved also make us human.
When I was little, the ward sister would say, “Put that crying baby down.  They don’t need a hug.”  In her eyes, children like us didn’t need human contact, let alone love.
We were all treated the same way, so we grew up thinking that that was normal.  Mind you, at the age of five, I also thought it was normal to be taken to Lewes Prison to visit the inmates.  Our surroundings were so alike, it seemed that the only contrast between us, was we were locked away as punishment for being different, and they were locked away as punishment for doing wrong.
Yet, I was aware that kindness made me feel loved.  Kindness, that I had experienced from my foster parents, my sister, some of the nursing and teaching staff at Chailey.   But of them all, my rock was always Nurse Mary Shepherd.  Because of her, I recognised that humans were more than just fed, watered, educated and disciplined.
Despite my up bringing, the need to love and be loved was instinctive.
As I grew up, I felt love and respect toward my friends and myself.   As I grew older, I fell in love, I made love and experienced the joy of parental love.
I still do, but these feelings, feelings that make us human, are often denied to people like me because of our disabilities.
So, what do I think makes us human? Four needs, to love, to be loved, to be accepted and respected.

The relief was palpable.

During her chosen song, I left the studio for Ali didn't need my strengths anymore, she could use her own. She shone in the following interview. She moved listeners to tears and her essay was described as one of the best.
For me personally, I'm proud of my friend and my involvement in the project. I'm delighted that I've had my first paid commission, but I'm also mortified that the NewStatesman inexplicably, and unjustly, removed my name as co-writer when they published the essay. That said, no-one can remove the fact that we did a good day's work on Wednesday and, as Ali said, I hope her contribution to the series has helped to change attitudes towards disability.
Thanks for popping by and see you next week.