Hello and welcome to my blog. Sorry its been such a long time since I dropped in, but boy, what a difference a fortnight makes. It can be summed up in three words - Adur Ferry Bridge.

Althougth I saw it take shape, it was only when we were on it that we really appreciated its beauty. With its broad, uncluttered walkway, glass sides and stylish lighting, it really is magnificent. I contacted Tony Bathmaker, one of the project managers, and he's been delighted with the response and like me, has become aware that people are strolling across just for the sheer pleasure of it. So thank you WSCC, Osborne Contractors and everyone else who had a hand in making it.

I can't find a link between that and my next piece, so I'm going to dive straight in and tell you about the Seven Forts Challenge which was completed by some of the Friends of Shoreham Fort on the August Bank Holiday. 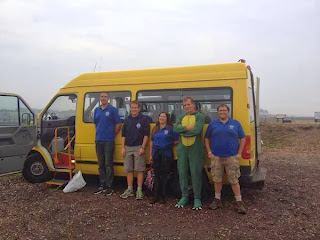 For ten months, Craig Searle, meticulously planned the route which took in Forts Southwick, Widley, Purbrook, and Farlington Redoubt. The intention was to complete it in 24 hours, so in the ten weeks leading up to the 24th August, they practised walking the 14 mile route between Shoreham and Brighton Marina RNLIs.
When the day itself arrived, they received a great send off at Fort Nelson, and set off at 10.50 a.m, slightly behind schedule. 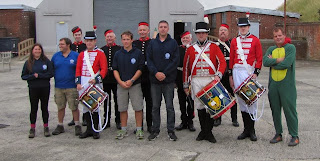 Shadowed by Phil Penfold and Julie Searle in the support bus, they made great progress initially, but the walk on the shingle beach from Bognor to Littlehampton, took its toll. By the time they had reached Littlehampton Fort, Gary had injured his knee, Hayley her back, and Craig his calf muscles. All, but Gary, had blisters on blisters. He avoided those by changing his boots at every stop.
By 4.00 a.m they had reached Ferring. Then the rain set in. The walkers were now tired, wet and injured, so the support team fought their own exhaustion to lift their friends spirits. Meantime, back at home, Sharon Penfold was posting their progress on their Facebook page, but even she, "could just tell that morale was going through the floor,”
Nevertheless they trudged on, supporting each other and taking strength from friends and family who turned up to cheered them on.
They finally arrived at Shoreham Fort at 8.20a.m, having completed the 50 mile route in 22 hours. “ I never in a million years thought I would do it. It’s an amazing feeling,” said Hayley.
Over the succeding two days, the walkers nursed their injuries, tended their blisters and Gary slowly re-gained the use of his legs. "I was like Bambi the day after. I got out of back and thump! Straight on the floor!" Would they do it again? I think the jury is still out.
As always, the Friends would be pleased to welcome any new volunteers and if you missed their moving Remembrance Day service this year, here's a flavour of that crisp, cold evening.
And I almost forgot, Shoreham Bonfire night. Another super, family event and an unmissable night. I did feel for the volunteers who ignored the torrential rain to build up the bonfire. Thank you.

It's time to go now. Thanks for popping by and see you soon.