I've been gone too long!  The rate of blog posts has nose-dived because it's taking longer to adapt to expat life than I'd hoped. However, I've taken myself in hand and that's all changing so today, I want to share some news.
I've been asked to teach creative writing for the American Association of Singapore. The course is called Time to Write and starts on 30th April.
Its been written with aspiring and lapsed writers in mind and over three weeks, I'll be touching on how to write fiction, how to approach non-fiction and teaching workshopping skills. It's an intensely practical, low-tech course and the students will have to shed their inhibitions and dive straight in. I'm just adding the finishing touches to the course material and will let you know how it's going next week. In the meantime, if you fancy joining up, book here. I guarantee you won't regret it.
The second bit of news is that Blood and Bandages is doing well over here despite its focus on the war in Europe. I had feared that a story set against one of WW2's most neglected campaigns, the Italian Campaign, would sink without trace in SE Asia. Not so. It's being bought by English, Australians, Canadians, Dutch and Singaporeans. Popular glossy magazine, ExPat Living wants to sell them and I'm collaborating with Jane's Tours SG, an award-winning travel company, to present a literary evening on Blood and Bandages on 10th May. If you would like to hear about the extraordinary work of the Royal Army Medical Corps during WW2 book here.
The event is being held at our home so thank goodness our garden project is almost done.
You may remember the photos I posted when we first moved in. If not, they showed a pretty colonial bungalow in the middle of a field. 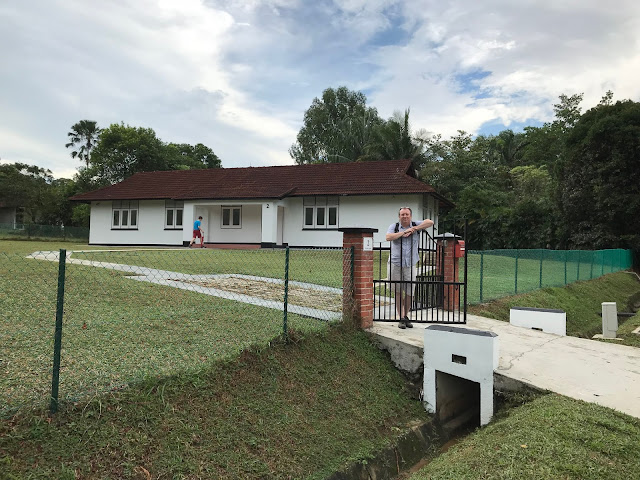 Not a plant in sight.

We felt the absence of a garden keenly, so when Richard received his annual bonus, a portion was set aside for landscaping.
The remit was to create a pretty garden which gave us privacy, shade, points of interest and colour. Our hard-working and imaginative garden guru, Benson Ang from Chwee Nursery commenced work in January.
Stage one focused on creating privacy. 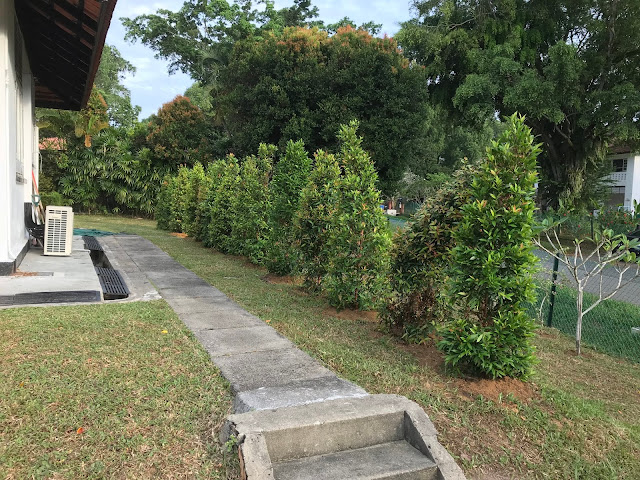 A Eugenia hedge screened us from the road. 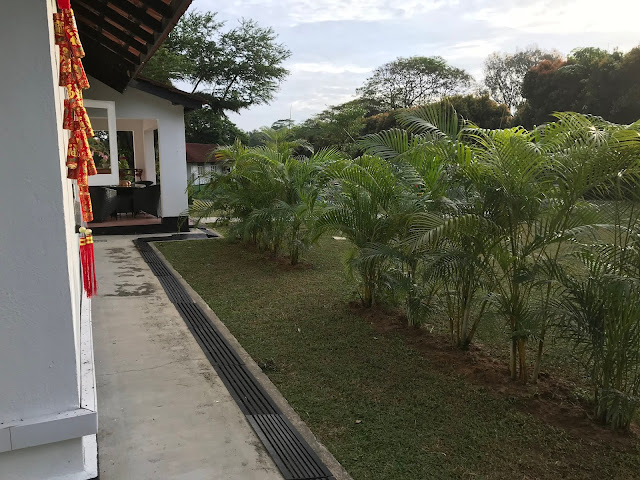 Yellow palms disrupted the view from the path to the bedrooms. 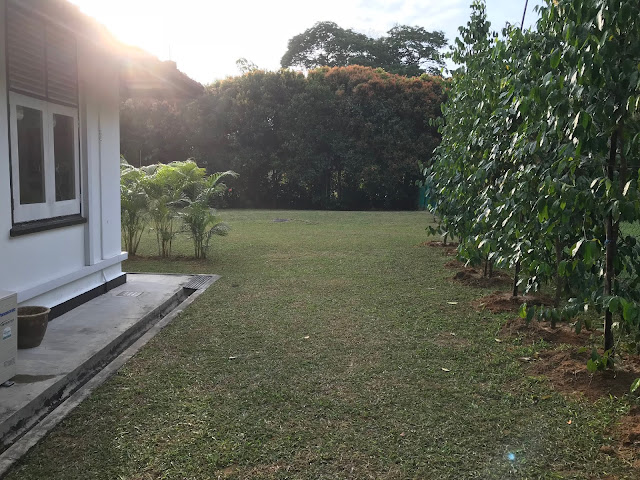 Sadly, I have forgotten the name of these trees but they provided privacy on our other boundary which bordered a public footpath. 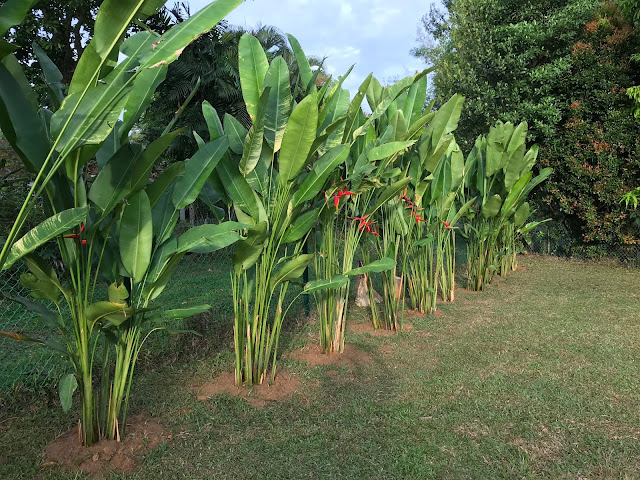 A line of Heliconia Bihai was added behind the trees to add more screening and colour. 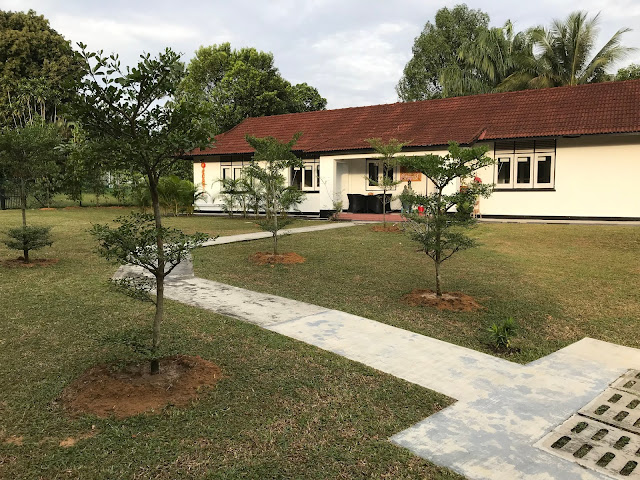 The piece de resistance was the tree lined path which added a delicate oriental feel. Their branches will eventually join to form a shady green corridor.

With the privacy almost in place, we moved onto stage two. 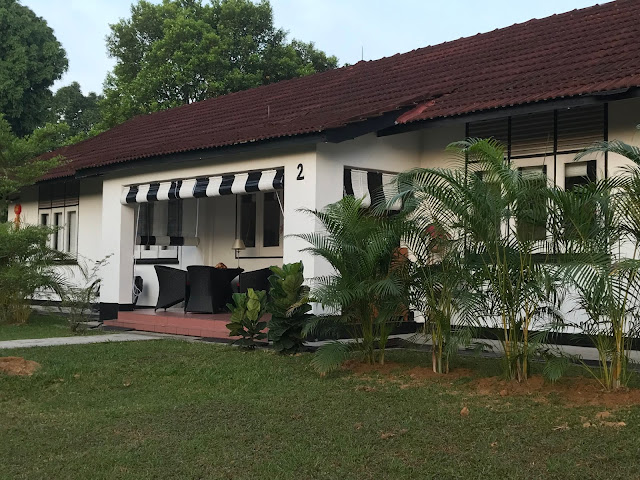 Yellow palms were added in front of the study window to create symmetry. I love looking onto these when I'm working. 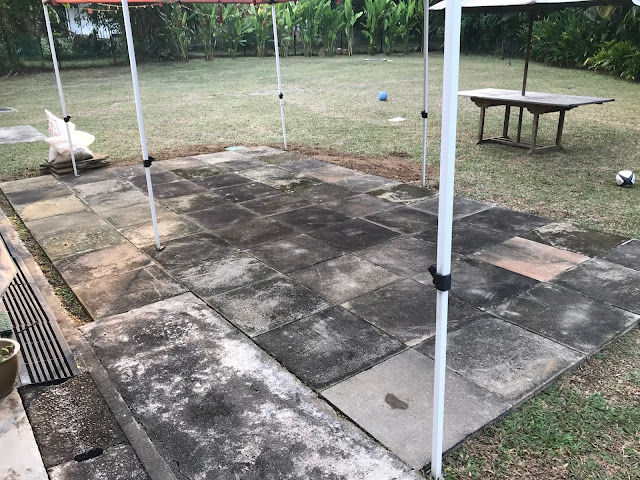 A patio was laid in the back garden so we had a firm base upon which to put our dining table and chairs. 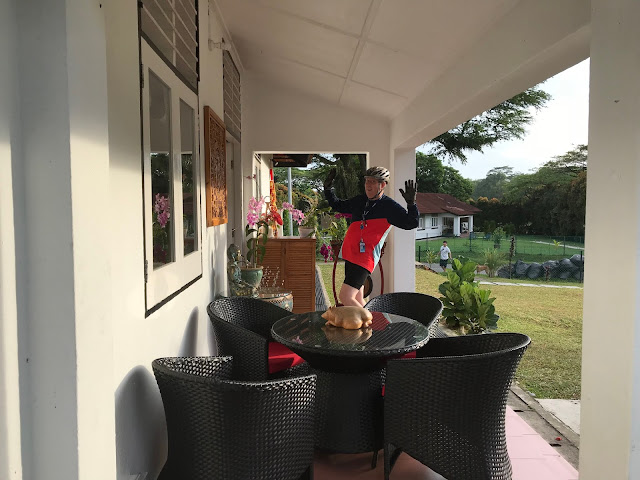 At the same time, we treated ourselves to some new outdoor furniture, of which Richard is obviously thrilled. 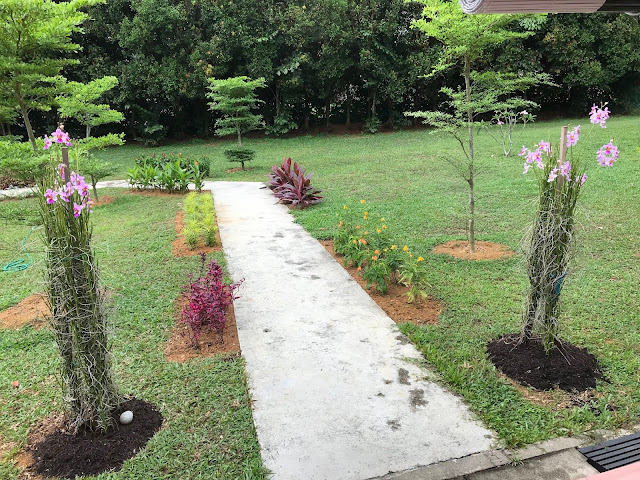 Finally, a range of colourful plants and tree orchids framed the path, the path upon which I hope to welcome 20 guests from Jane's Tour's on 10th May.

Stage two is now finished so it's time to move onto the final section, the construction
of a water feature and the addition of wind chimes. I can't wait to see it come together.
Well it's time to go now but I've enjoyed this catch-up.
I'll be blogging more regularly from now on because I have to start following the advice I'll be giving my students on Time to Write. To be a good writer you have to read and write constantly.
Thanks for dropping by. Ta-ra.
Posted by Liz Coward at 07:51