Hello and welcome to my blog. If you're a newcomer, come on in, pull up a chair and take a break for a few minutes. If you're one of the regulars, I hope you've had a good week and I really will sort this "weekly" thing out.
Before I get started, I know you're dying to know how it went. Well, thanks to Jon Kay (director), Anita Gilson, Penelope Richards, Katie-Anna Whiting, Miranda Morris, Aidan Stephenson and Will Wolfe Hogan, the play went very well. The other five pieces were great, yet different, and the contrast was appreciated by the audience.
To celebrate, my husband and I thought we'd treat ourselves to a glass of champagne, so that night the posh flutes were dusted off and Richard went to get the bottle. Now we knew we had mice in the garage. We were pretty relaxed about it until they nibbled at the Champagne cork. The next day, to the accompliment of shrieks and squeals, they were unceremoniously relocated; three to the great mouse house in the sky and four to the Old Fort.

Talking of which, I met Gary Baines there a few weeks ago. He is a remarkable man who's taken a keen interest in the Old Fort since he was 4 years old. Here's just a snippet of what I've learnt from him.
In the 1860s, Lord Palmerston ordered 70 forts to be built to defend the South Coast from the threat of a French invasion. Whilst Shoreham was not one of these, it could be described as a Palmerstonian Fort and is certainly Victorian. It was completed in 1857 at a cost of £11,685.10s.
Shoreham Fort had six 68 pounder cannons; 2 underground magazines designed to take 126 barrels of gunpowder; a ditch and 2 foot thick Carnot wall out of which sprung 3 Caponiers from which the soldiers could open fire. The Fort was manned by the 1st Sussex Volunteer Artillery of the Eastern Division, Royal Artillery who were housed in the Fort's barracks. Although the threat never materialised, the Fort was manned until 1896. 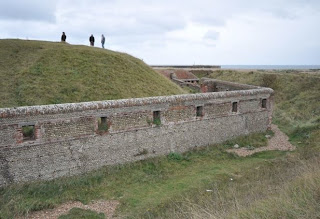 Shoreham Fort looking along the Carnot wall towards the South Caponier.

During the Second World War, a battery of 6 inch guns were erected, the walls modified and a searchlight tower built to the west of the site. The barracks were put to various uses until they were demolished in the 1960s. Around the same time the coastguard tower was built on the site of the western magazine, and remains there today.
The Old Fort is owned by Shoreham Port Authority and has been designated a Scheduled Ancient Monument by English Heritage . This means they consider it one of the country's "most valued archaeological sites" creating a "unique sense of time and place in the landscape." To Gary Baines, though, it's much more important than that.
He was 4 when his beloved Granddad, Gerry Baines, took him to the Old Fort. They played in the ditches and the Caponiers, dodging make-believe bullets and firing from walking sticks. Sadly that was the one and only visit because Granddad died later that year. After his death, Gary clung to the memory of that day. He searched for the place but all he could remember was an old fort near a white tower. Then when he was 15, he was travelling along the coast road and happened to glance towards the sea. There in front of him was the white tower and the Old Fort. After an 11 year search, he'd found it and spent the next six years researching the Fort itself. Gary gathered all the scattered information, ordered it and published it on his website on Shoreham Fort. He was 21 and on his way to creating his own memorial to his much loved Granddad; to restore the site to the condition it was in the 1970s when Fred Aldworth, the County Architect, had worked on it.
That was eight years ago. Since then he's acted as a monitor for English Heritage; paid for a builder to assess the brickwork; worked with Shoreham Port Authority to tidy the site; and gathered together a group of volunteers (pictured below), to undertake basic gardening jobs until English Heritage allows them to do more. 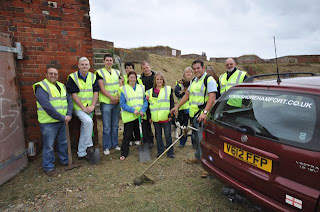 There's much to be done. English Heritage describes the condition of the Fort as poor. It's in slow decay, vulnerable to vandalism and the elements. Parts of the Carnot wall which were once 2 foot deep, are now only 10 inches thick with a maximum lifespan of 24 months. 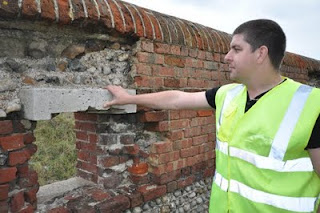 Gary at one of the weak points in the Carnot wall.

However, restoration work cannot commence until English Heritage have received their own engineer's report, decided what should be done and whether funding is available. In the meantime, Gary will be back there in his free time, keeping an eye on the site until he can start the gardening works again in the spring.
His is a labour of love. Once it was purely focused on his Granddad but that's changed over time as the site's become more unstable. With the threat of closure should the Old Fort become too dangerous, his focus is on preserving free and constant access so that visitors can continue to walk around the ditches and play fight on the Caponiers. He wants the restoration and preservation of the Old Fort to become a community project now and he's looking for help.
If you would like to get involved please contact him on his website. He needs volunteers - there's a job for everyone, not just the able-bodied; donations of gardening tools; free legal advice on how to set up and run a charity for the Old Fort; and comments from Beach Residents on what we'd like to do with our ancient monument.
I'll be back next week with another blog from the Independent Republic of .. and in the meantime have a great week. Many thanks to Gary and his team for working so hard and giving your time so freely. It was a real pleasure meeting you all.
Posted by Liz Coward at 19:41