Always judge a boat by it's cover.

Hello and welcome to my blog. It's lovely to see you again and doesn't the sunshine make a difference? You can chat with your neighbours now rather than wave briskly as you sprint from car to house. The daffodils are blooming and the "For Sale" signs are popping up. No doubt about it, Spring is here.

Well, I don't know about yours, but my stomach's had a wonderful time recently. Our four year old insisted on taking us to Jamie's Italian for lunch, and we had a wonderful time. The truffle pasta was delicious and Tom tucked into his ice-cream with delight. The atmosphere was warm and genuinely family friendly. One busy waiter even took the time to track down a yellow crayon so we could finish our drawings. Well done Jamie, two gold stars from me. 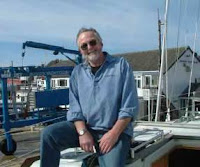 another treat when I joined Graham Whittington for lunch at the Sussex Yacht Club. I'll be dedicating a blog to that later this year, but Graham began my education in boating matters over a delicious plate of Sea Bass and salad.

Graham's a Marine Surveying and Engineering Consultant, or boat surveyor for short. Boat surveyors perform functions similar to house surveyors but rather than checking roofs, walls and guttering, they check hulls, sails and masts and can undertake test sails before reporting back to the client. Graham's engineering background also qualifies him to check the engine which makes up a high percentage of the boat's overall cost.

The work is interesting and allows him to sail all over the world but occasionally he finds he needs the skills of a detective rather than those of a surveyor. For instance, he was once asked to survey a Dutch built 60 foot steel boat. Graham turned up, took a look and thought he'd be surveying an old sailing boat complete with mast, sails and gun ports. However, as he was inspecting the hull, he discovered that it was comprised of two parts. On the bottom half the steel plates had been riveted together whilst on the top, they'd been welded. That meant that the hull had been built at different times and he could be dealing with the marine equivalent of a "cut and shut." Intrigued, he took a closer look at the engine. It was not the original one, so he cleaned it off expecting to find an English or Dutch identification plate. Instead, it was German. When he checked the number and description, he found that they belonged to the German Army. Further digging revealed that the boat was indeed Dutch, but it had been impounded in Holland during the Second World War. The Germans had apparently planned to use it as an invasion barge so removed the original engine and installed a larger one. Due to the RAF's heroic efforts in the Battle of Britain, the Germans shelved their invasion plans, and the boat was never used. It remained unchanged until after the war, when a new hull was welded onto the old so it could be used as a party barge.

I never found out if the client bought it, but I expect the survey made interesting reading.

My education into all things boating will continue over the next few months and I promise to share more interesting bits with you.

Thanks for popping by, and if you're Iranian, Happy New Year.

Have a wonderful week and see you soon.