Hello and welcome to my blog. It's great to see you again.

As the temperature rises, the Independent Republic of Shoreham Beach comes into its' own. Parents cycle children to school, customers linger outside Bakery 2 and BBQ smoke mingles with birdsong. Come and join us.

Failing that, amble down to the end of Brighton Pier next Friday to watch the start of the largest offshore race on the South Coast outside of the Solent. 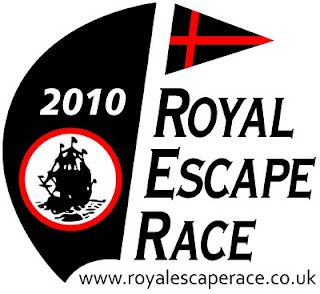 Eighty boats are involved this year and if you arrive at 7.30am, you'll see them jockey for position before the race starts at 8.00am.

They'll be racing to Fecamp, 67 nautical miles away and on arrival, will be greeted by the Mayor, local dignitaries and 100s of French and English supporters. Once the last boat has moored up, and the prizes have been awarded, the celebrations will begin. Not surprisingly, the Royal Escape Race has become a high point in both the Fecamp and Sussex Yacht Club calendars.

The Royal Escape Race was the brain-child of Linda Morgan, the PR officer for the Old Ship Hotel in Brighton in 1976. She contacted the Sussex Yacht Club with the idea of a race across the Channel to commemorate Charles 11's escape from Shoreham to Fecamp in 1651.

Charles 11's journey on the Surprise, was the final leg in his flight from Cromwell's troops after the Battle of Worcester, and the beginning of nine years in exile. Within two years of Cromwell's death in 1658, Parliament asked Charles to return as King and on his way back to England in 1660, Charles spoke to Samuel Pepys, the diarist, about his escape; "..it made me ready to weep to hear the stories that he told of his difficulties that he had passed through." Twenty years later, Charles dictated some more of his story to him;

"We went to a place, four miles off Shoreham, called Brighthelmstone, where we were to meet with the master of the ship, as thinking it more convenient to meet there than just at Shoreham, where the ship was. So when we came to the inn at Brighthelmstone we met with one, the merchant [Francis Mansell] who had hired the vessel, in company with her master [Tettersell], the merchant only knowing me, as having hired her only to carry over a person of quality that was escaped from the battle of Worcester without naming anybody."

The boat was supposed to be bound for Poole, but Charles explained, "As we were sailing the master came to me, and desired me that I would persuade his men to use their best endeavours with him to get him to set us on shore in France, the better to cover him from any suspicion thereof, upon which I went to the men, which were four and a boy."

When Charles returned in 1660, Captain Tettersell reminded Charles of that escape by sailing up the Thames and mooring the Surprise opposite the palace at Whitehall. Charles responded by giving Tettersell a commission from the Navy. The Surprise was commissioned as a fifth rate and renamed the Royal Escape.

The Royal Escape Race is now in its 34th year and one of this years competitors is the Moonlight Saunter.

The Moonlight Saunter is a 41 foot Feeling 416 fast cruiser owned and skippered by David Skinner, Captain of the Sailing section at Sussex Yacht Club and one of the clubs' former Commodores.

David has raced in 30 of the 34 Royal Escape Races. During that time he's notched up 4 second places, many top 10 finishes, and in 2004 was the overall winner.

He would be delighted to win again and this year is skippering a crew of 6 strong and experienced sailors and keeping his fingers crossed for a force 5 wind just off the bow. Whether he wins or not will be down to luck on the day as "races are won and lost in seconds."

Good luck to everyone taking part, particulary David and the crew of the Moonlight Saunter. I'll be waving a croissant at you from Brighton Pier.

Have a fabulous weekend and see you next week when I'll be writing about the part the RNLI played in the Dunkirk evacuation.