A great day out.

Hello and welcome to my blog. Nice to see you again.

It's been another glorious week down here and it got off to a cracking start last Sunday with Shoreham Port's Open Day.

Over 15,000 people attended, (up 5,000 on the previous one), and we were treated to a display of vessels, stands, exhibits, and entertainments.

Whilst we mooched along the quayside admiring the view, we learnt that the Port handles around 2 million tons of cargo a year, and employs 1,400 people at Shoreham itself with another 10,000 within a 50 mile radius.

Just in case you didn't make it, here's a small sample of what was there. 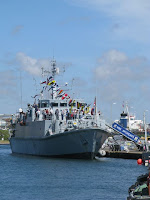 She was launched in April 2001, commissioned in September 2002 and is claimed to be "..the world's most capable and sophisticated minehunter."

She's built almost entirely from non-magnetic materials and has a speed of 13 knots (diesel) or 6.5 knots (electronic drive). 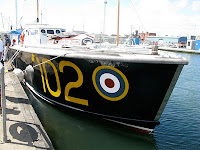 She was one of only 22 100 - Class High Speed launches used by the RAF to rescue airmen ditched in the sea during World War II. This boat alone saved 38 airmen during the Battle of Britain in 1940.

Apparently she was also one of the Shoreham Houseboats but nowadays she can be chartered for a variety of purposes such as corporate events, weddings and day trips. 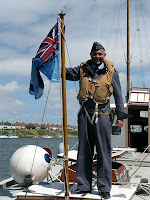 Peter Emery, dressed as a member of the Air Sea Rescue Service RAF, on board HSL 102. 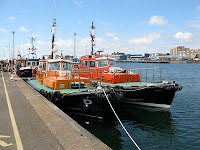 These are used to transport the Port's Pilot to ships wishing to enter the Harbour. Once on board, the Pilot uses his local knowledge to guide the vessel safely to the quayside, whilst the Pilot Boat stands by to collect him when it's docked. 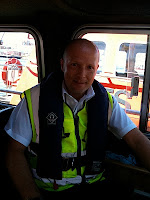 Keith Laker, coxswain of the Pilot Boat, explained that Shoreham was a tricky harbour to negotiate as it has a small entrance which quickly divides into two channels. As one leads up a tidal river and the other to a lock, an in-coming vessel has little room for manoeuvre.

The All Weather Lifeboat, Fisheries Protection Vessel, and Moonlight Saunter were some of the other boats on display and there were boat trips up and down the canal. If you didn't manage to get there this year, do make the effort next year because it's well worth it.

I've decided to take this summer off so this will be the last blog until 10th September. I'll be back then with a line-up of new interviewees and issues to discuss. So have a great summer wherever you are, and I look forward to meeting again in early Autumn.