So how was it for you?

Hello and welcome back. It's lovely to see you again.

So how was your summer? Just like the Camerons, we stayed in England but rather than have a baby, we went on family days out. I have to say, I was stunned by the beauty of parts of East Sussex and ashamed of my ignorance. 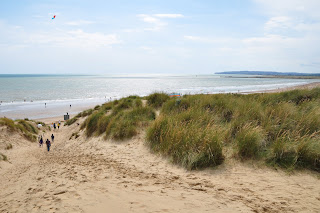 Camber Sands came top of my list of the child friendly locations, but next time we'll eat our picnic in the car park, sand and ham sandwiches being an acquired taste. Also if you go, beware of the Weaver Fish and if you step on one, don't be brave and hobble back to your towel. Stand still and holler for help otherwise the sting will be dismissed as a mere shrimp nip. Shrimp nip my @*!! I could've died. 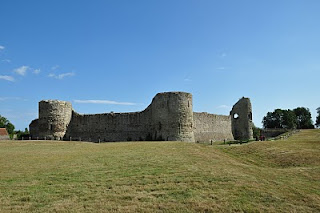 There were no Weaver Fish at Pevensey Castle, just our lively 5 year old to contend with. We expected him to clamber over the ruins and dismiss efforts to educate with an imperious, "I already know that," but once he'd seen the dungeon, he was captivated. We walked hand in hand around the castle listening intently to the audio tape. As I tried to work out which way next, Tom was off, leaving me to wonder whether our off-spring was a genius or was I behind the curve, again. 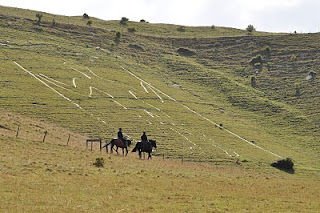 The answer came when we visited the Long Man of Wilmington. It was with some trepidation that we laced up our walking boots because our little one is not known for his stamina and is often too tired to walk 10 feet from the car to the house. Thus as we gently ascended the hill, I anxiously checked whether he was OK. I shouldn't have bothered. The moment we got to the steep part, I slowed down and he shinned up, as sure-footed as a mountain goat. He paused occasionally to shout back, "Come on Mummy," as I contended with the joint problems of exhaustion and vertigo. To add insult to injury, when we reached the top he still had enough energy to dance round singing, "This is brilliant!" He's since made mince-meat of the Fulking Escarpment and I've stopped carrying him from the car to the house. Nevertheless the writing is on the wall, I have to shape up to keep up.

Talking of keeping up, I recently spoke to Elizabeth Mienert, one of the Old Fort Charity trustees, about the Options Appraisal for the Old Fort site. It has been completed and tomorrow there will be a picnic from 1.00-5.00p.m on the old parade ground to demonstrate its' potential as a community venue. Everyone is invited and next week I'll report back on what they're proposing.

In the meantime, have a great week and see you next Friday.