Hello and welcome to my blog. It's wonderful to see you again on this bright, dewy autumn morning. I'm reminded of Ode to Autumn which is a mixed blessing as I can only remember,"mists and mellow fruitfulness" and it's driving me bananas.

Apart from enjoying this lovely weather, this week I've been meeting people who'll be contributing to forthcoming issues of my blog. First I met Elizabeth Mienert, one of the Old Fort Trustees, who'll feature today. Then I spoke to Keri Hamblin from Adur Voluntary Action who explained how they bring voluntary organisations and volunteers together, and finally I visited the Old Fort with Martin Taylor, a director with MDA Consulting Ltd, who raised some thought-provoking ideas about the beach.

Elizabeth Mienert is an Artist, Community Development Worker, and Trustee/Director of the Old Fort Trust. She was born in Shoreham and apart from a brief spell at university reading Art and Film, has spent all her life in the town. She knows it well and is extremely proud of it. So proud, in fact, that for the last three years she has been one of a team energetically seeking to celebrate all aspects of the towns' past and present.

This energy has been focused on the derelict coastguard tower which the owners, Shoreham Port Authority, planned to demolish in 2007. Elizabeth was one of those who originally objected to the demolition arguing that the position of the tower on top of a scheduled ancient monument was "an interesting juxtaposition between old and new" and that the building could provide an ideal focal point for a diverse range of projects. Three years on, the tower is still standing and Elizabeth is now one of five trustees of the Old Fort Charity which has a clear vision of why it should be renovated. 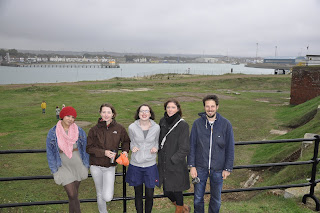 "Our vision is for Shoreham Fort to be a vibrant, inspiring, diverse and cultural educational place where everyone has the opportunity to get involved. We need the renovation of the coastguard tower in order to use it as a base from which we can organise events and activities to take place in the Shoreham Fort parade ground. We envisage music theatre and arts events, history projects and natural history activities taking place on the Shoreham Fort site. We wish to make it easier for these events to take place by allowing the coastguard tower to be used as office/studio/workshop/education space and for storage of equipment etc, and exhibition space in the lower magazine part of the tower and a kitchen area with a hatch to serve light refreshments to the outdoor space." (Old Fort Vision summary)

It has gathered over 400 signatures in support and has attracted enthusiasts from the world of arts and entertainment, (Nick Cave, Demuth Photography and Revolutionary Arts Group), education and conservation. Indeed, Richard McFahn, Humanities Adviser for West Sussex County Council said, "I fully endorse the concept you have for developing Shoreham Fort. Local history is vital in helping school pupils understand their sense of place, sense of time and sense of self...Promoting local arts is also vital in helping create well rounded people to live and thrive in the 21st century."

The charity has just published the results of its' options appraisal which lists 10 possible options for the site and seeks responses from all interested groups and residents.

Some already feel strongly that the coastguard tower is an eyesore and should just be demolished. Yet what does and does not have architectural merit is subjective, so it's unlikely that those with strong views will ever agree. Furthermore, is there an underlying problem of perception which should be tackled first?

Shoreham Fort and the site it occupies have become synonymous. To even describe the area as "the Shoreham Fort site" takes a leap of the imagination. If the site and fort cannot be distinguished because it's too deeply embedded in one's consciousness, then to encourage more visitors onto a scheduled ancient monument which is already "in slow decay," is verging on the reckless. But what if you can distinguish between the site and the fort, what would you find?

At it's most basic level, the site marks the end of the Beach and the place where Friends of Shoreham Beach meet for rock-pooling. It also marks the point at which, in 1760, Shoreham's merchants took effective action to stop the longshore drift further damaging the harbours' business. The resultant act of Parliament created a Port Trust (the 250th anniversary of which was celebrated this year), and piers were erected to protect a new harbour entrance. From that point on the Old Fort site became significant for it was there that the eastward movement of the river mouth was halted.

With the creation of the piers, Shoreham, at last, had a stable harbour entrance and the port was thrown a life line. Surely it is no coincidence that Shoreham Fort, a WW2 searchlight tower (now the NCI Watchstation), and the coastguard tower were all built behind the western harbour arm, it being an ideal position from which to protect and assist shipping and defend the harbour against the threat of invasion. So when the Fort was built in 1857, the site was already important. So, arguably the location of Shoreham Fort is far more important to Shoreham's history than the Fort itself for it represents man's successful attempt to control his environment and protect the town's future.

Thus it is only when Shoreham Fort is separated from the location, and the location itself is placed in its' historical and geographical context, that we can really judge whether the Old Fort site is the best location at which to celebrate Shoreham past and present. Then we can decide whether the coastguard tower is the best building in which to honour our town.

I'll see you next week, but in the meantime, I'll let Keats can have the final word.

Season of mists and mellow fruitfulness,
Close bosom-friend of the maturing sun;
Conspiring with him how to load and bless
With fruit the vines that round the thatch-eves run;
To bend with apples the moss'd cottage-trees,
And fill all fruit with ripeness to the core;
To swell the gourd, and plump the hazel shells
With a sweet kernel; to set budding more,
And still more, later flowers for the bees,
Until they think warm days will never cease,
For Summer has o'er-brimm'd their clammy cells.

Who hath not seen thee oft amid thy store?
Sometimes whoever seeks abroad may find
Thee sitting careless on a granary floor,
Thy hair soft-lifted by the winnowing wind;
Or on a half-reap'd furrow sound asleep,
Drows'd with the fume of poppies, while thy hook
Spares the next swath and all its twined flowers:
And sometimes like a gleaner thou dost keep
Steady thy laden head across a brook;
Or by a cyder-press, with patient look,
Thou watchest the last oozings hours by hours.

Where are the songs of Spring? Ay, where are they?
Think not of them, thou hast thy music too,—
While barred clouds bloom the soft-dying day,
And touch the stubble-plains with rosy hue;
Then in a wailful choir the small gnats mourn
Among the river sallows, borne aloft
Or sinking as the light wind lives or dies;
And full-grown lambs loud bleat from hilly bourn;
Hedge-crickets sing; and now with treble soft
The red-breast whistles from a garden-croft;
And gathering swallows twitter in the skies.

Courtesy of http://oldpoetry.com
Posted by Liz Coward at 07:16