A life in the day of Liza McKinney, Marine Ward Councillor.

Hello and welcome to my blog. I hope you've had a splendid fortnight. Mine's been mixed. Apart from a fascinating three days interviewing for the blog, and celebrating our NCI's successful application for Declared Facility Status, I've spent the whole time wrestling with the kitchen re-fit. We're back in now, albeit without a floor, blinds or tiles, but we've got an oven and hob. Believe me, if you'd spent three weeks living off microwave meals, you'd mention it too.

Last time we met, I mentioned that Liza McKinney would be featured today. She is the first of four 'a life in the day of,' blogs which will also feature Rev Gail Souppouris from the Church of the Good Shepherd, Maireadh Knight, our Police Community Support Officer, and John Bradshaw, Chairman of Shoreham Beach Residents Association.

I hope you enjoy reading them as much as I enjoyed getting to know them. 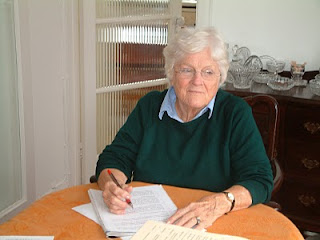 Liza McKinney, 77, has been a Shoreham Beach Residents Association Councillor since 2000. She lives alone and has two sons, Damien, 50 and Julian, 49, eight grandchildren and 3 step-grandchildren.