Hello and welcome to my blog. It's lovely to see you again.

We've had some sunshine these past few days, but no chance of getting too excited as it's been paired with bitterly cold winds; Mother Nature being a bit of a tease there. It didn't bother me too much as I've been holed up transcribing a detailed interview I had with Dave Cassan, Press Officer at Shoreham RNLI, last December.  I'll be sharing some of his fascinating insights with you over the next few weeks, but in the meantime thought I'd tell you why it's caught my imagination.

Over the last few years, we’ve seen the demolition of the old lifeboat station and completion of its’ replacement. 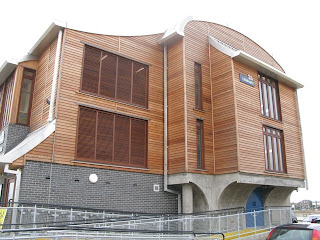 It’s likely to be the RNLI’s last major refurbishment on the South Coast, and was built to house our new Tamar class lifeboat, Enid Collett.

Known as “the jewel in the fleet,” the Tamar class is the RNLI’s latest design in lifeboats and is gradually replacing the slower, smaller and lighter Tyne class, like our old lifeboat, Hermione Lady Colwyn.

The RNLI chose to replace Shoreham’s lifeboat because it is a key lifeboat station what with its’ Port, fishing fleet and extended area of operation. Indeed Shoreham crews have attended shouts from the Solent to Dungeness. However, when it came to rebuilding the lifeboat station, the RNLI were concerned about rebuilding on the same site.

Slipway launched lifeboats, like ours, are not popular with the RNLI. They prefer the safer and less expensive “afloat boats,” like those at Brighton or Littlehampton.  Thus they spent 18 months exploring the option of a lifeboat station on stilts at Southwick Locks, before resorting back to a slipway launched boat on the current site.

A frustrating 14-month delay followed as planning problems were dealt with, but this was tempered when Shoreham learnt that they were to benefit from a large legacy left by a lady called Enid Collett. Enid Collett came from Cambridgeshire and was involved in the theatre for most of her life.  She died leaving 50% of her estate to the RNLI which covered half the £2.7million purchase price of the new Tamar.

On 10th December 2010, the Newhaven, Brighton and Littlehampton lifeboats escorted Enid Collett to our new lifeboat station. "It was a truly historic occasion for us,” said Dave Cassan, RNLI Press Officer, “The last time this happened was in 1933 when we got a new boathouse and boat so what happened on Friday will be the first and last time that any crewmember at Shoreham will see that.”  Two days later, Enid Collett was called out on her first shout from the new station.

The official naming and dedication ceremony for both the lifeboat and the station will be held in mid-June.  However, the station is already open to the public from Mondays to Fridays, 10.00am – 2.00pm and weekends from 10.00am – 4.00pm. Group visits can be arranged outside those hours.

If you can't get there, here's a virtual tour I made earlier.

If you would like to know more about our station or make a donation to the on-going appeal please visit the Shoreham RNLI website.

Thanks for popping by and see you next week when I'll take a closer look at the lifeboat crews.