Hello and welcome to my blog. It's lovely to see you again and once more I apologise for going AWOL. I promise I've not just been lounging around drinking lattes, I've been busy working on two projects; The Death Dodger : memoirs of a RAMC Medical Orderly 1940-46,  and my feature film. I've even been talking about some of it on BBC Radio Sussex.

That came about because earlier this year Radio Sussex appealed for recruits for a programme called 100 Lives; a show which aims to interview 100 Sussex residents throughout 2011 as they strive to achieve a certain goal. I applied because I wanted to write a feature film and knew a bit of outside pressure would keep me on track.

However they didn't want me at first, then someone dropped out so at 1.40pm last Monday I found myself sitting opposite Sylvie Blackmore telling her that this was the year when I was going to write a feature film.  I couldn't give much away save to say that the film should do for flying what Jaws did for swimming. I was terribly nervous but Sylvie was brilliant; warm, friendly and welcoming. The whole process only took 6 minutes and then I was back out into the sunshine, still quivering like a jelly. That was nothing that couldn't be seen off with a big bag of yoghurt coated banana chips, so off I tottered to Holland and Barrett waiting for someone to tap me on the shoulder and say, "You're that Liz Coward off the radio aren't you?" Didn't happen.

In the meantime, have you noticed that the marquee is up on Beach Green ready for the start of the Beach Dreams Festival? From 28 May to 5th June, it'll be the focus of a variety of community events such as the Family Fun Day on Bank Holiday Monday; the Dance Day on Wednesday and Beach Dreams weekend which will kick off with parades on Saturday 4th June.


But parades, performances and live music won't be the only highlights that day. We'll have the second Cannon Firing and Military History Day at the Old Fort. 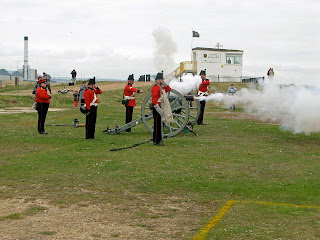 The Fort Cumberland Guard, Royal Sussex Living History Group and 23rd Sussex Home Guard will be there to entertain and educate; Gary Baines will be available to provide updates on the on-going restoration work, and at mid-day the Cannon will be fired with great ceremony. Just remember that there will be rolling road closures as the Beach Dreams Parades process towards Beach Green so if you are going to the Military History Day it may be wise to get to the Old Fort early.

I'll be covering the weekends events in another blog but now I'm off to finish my research on Lifeboats, and why they are designed the way they are.

Thanks for popping by, have a great week and see you soon.
Posted by Liz Coward at 21:56