Hello and welcome to my blog. It's lovely to see you again and a special hello to the readers I met recently.

I warn you, this blog will be full of superlatives because I want to tell you about the marvellous street party we held to celebrate the Royal Wedding of Prince William and Kate Middleton last week.

I'd never been involved in something like this before but, with a bit of prompting, hooked up with Diane, an unknown neighbour, and we sketched out a plan of action.

Beautiful handmade invitations were subsequently delivered to all in the Close and we anxiously awaited a response. After a slow start the idea gathered momentum and by the eve of the party over 90% of those invited were coming and those who couldn't had donated food or furniture.

We planned to hold the event on the Close's green and as the wedding day approached, chased the Council to mow the grass. They turned up at the 11th hour and did a great job but left us with thick rows of grass cuttings; great for grass fights, lousy for parties.

Hence in the evening, Diane, Dave, her patient husband and I strode out with rakes. We were keen, but it was a massive job for three. Luckily we didn't remain a three for long. Ron, in his 70s, was the first out, followed by Tracey and her young children, then more and more neighbours joined in. Some came straight from work or shopping, the elderly sent their children in their place and the infirm sent their green bins. In all over 24 people worked together for an hour and a half to clear the green. No-one was asked, they just came with rakes, sacks, goodwill and humour. That night, as more helpers turned up to blow up balloons and assemble place settings, Diane and I acknowledged that we were now just walk-on parts.

The following day was the big one and with over 100 people expected, we began setting up shortly after 8:00 a.m. For the next two hours a steady stream of assorted tables and chairs, gazebos and umbrellas appeared from all corners of the close. Trevor donated his trailer as a bar and by 10:00 a.m the street party was in place and we all returned home to watch the Princes drive to the Abbey. 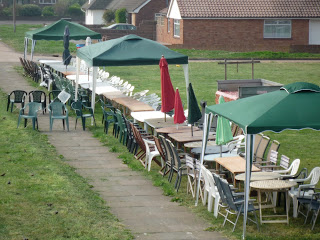 Shortly after the fly past over Buckingham Palace, we were out again ready to decorate the gazebos and lay the table.  As we worried whether we'd have enough table cloths, Neil appeared out of nowhere and asked if we needed a 25 foot roll of Union Jack catering paper. We could have kissed him. 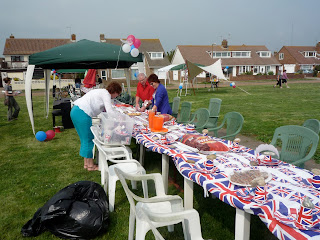 With the wind getting up, a team was dispatched to gather some pebbles from the beach and the call went out for the food. Trays of sandwiches, sausage rolls, cakes, quiche, tortilla, samosas, crisps and biscuits kept coming. There was enough to feed 200, let alone 100, and we realised that whilst we'd been raking, others had been baking. 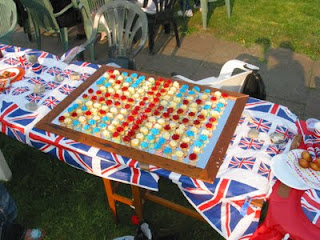 As the party got going, Diane and I watched contentedly as neighbours became friends, forgetting that we'd been strangers before all this. 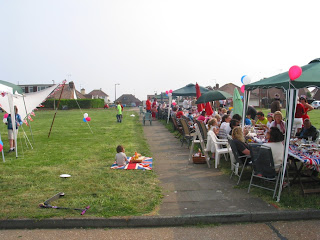 It was a splendid 48 hours and our only regret was that our spirited attempt to lead a sing-a-long became a duet.


As if by magic, at the end of the party the tables and chairs disappeared, the litter was collected and the rubbish recycled. All that was left were bags of grass cuttings neatly stacked in a corner.

People say that community spirit is dead and before our party there was a clear divide between the two ends of the close marked by the concrete path. Yet this division evaporated like a summer mist when we had a goal in common and the community spirit flourished. It took just the tiniest bit of encouragement, so perhaps it isn't dead at all, it's just gone to ground and needs a focus to bring it to life. When it does, boy, it grows like wildfire.

Take care and see you next week when I promise I'll talk about the history of the Lifeboats.

Photos courtesy of Ron, and Steve Coward.
Posted by Liz Coward at 12:35