Hello and welcome to my blog. It's lovely to see you again.

So much has happened since my last post that I don't know where to start. Perhaps the best thing is to dive straight into a potted history of Shoreham Fort.

During the 1850's, England faced the threat of a French Invasion.

It was believed that, rather than tackle one of the world’s strongest Navies, Napoleon III would invade along the south coast of England and march to Portsmouth. Shoreham, which was around 45 miles from Portsmouth, was identified as a potential invasion site, so Lord Palmerston ordered that Shoreham harbour should be fortified.

Learning from mistakes learnt from LittlehamptonFort,  Shoreham Fort was built with the following features: -

·      three covered Caponiers, rather than horseshoe shaped bastions, from which soldiers could repulse an attack,
·      11, 000 gallon water tanks to store fresh water, rather than wells which could become contaminated,
·      rifled, rather than smooth bore cannon, which had an increased range of 4,000 yards,
·      an experimental Carnot wall. 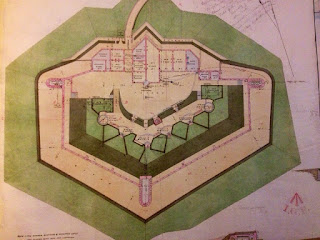 Shoreham Fort was to become a prototype for other Palmeston Forts, and its true nature was disguised from the French.

From the sea, it appeared to be a gun battery, a simple earthen mound with cannon on top. 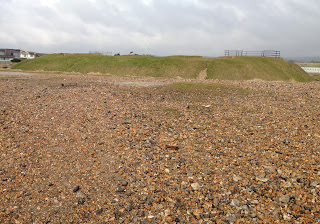 Only at close quarters, does it reveal its true nature, a heavily defended fort. 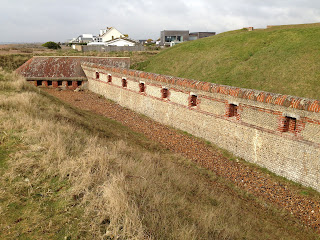 Thus if the French attacked the "gun battery,"they would suddenly find themselves tumbling 15 feet into a ditch and being fired upon from the Caponiers. If they could stop in time, they would have the unenviable task of trying to find shelter on an exposed shingle beach, whilst attacking a heavily protected enemy.

Fortunately the Fort never came under attack as, legend has it, one of Napoleon’s spies visited Shoreham Fort and the Emperor of the French subsequently decided to abandon his invasion plans.

Nowadays the Fort is much more welcoming.  Sunday Visitors are greeted by the Friends of Shoreham Fort ready to tell them about their latest finds, take them on a tour, or serve them a warm cup of tea and cake at Food for Fort.

As from next week, the Friends will be on site every Sunday, alternating volunteer days with tour days.

If you would like to join the Friends team visit www.shorehamfort.co.uk pop down one Sunday or attend one of the forthcoming events. You would be greeted with open arms if you could assist in Food for Fort even for an hour.

Well it's good bye for now. See you again soon.