Hello and welcome to my blog. The interviews for the next series of, "a day in the life on," are well underway and will be serialised later this month. In the meantime, in the wake of the new inquest into the deaths of the 96 Liverpool Football, I wanted to republish my 2012 blog on this country's worse sporting disaster.
On 15th April 1989,  along with millions of other viewers, I decided to watch the live broadcast of the FA Cup Semi-final between Liverpool F.C and Nottingham Forest at Hillsborough. 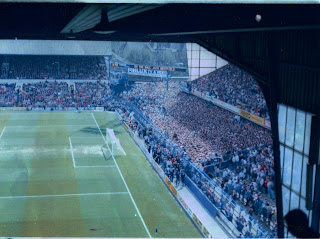 Central pens of Leppings Lane terraces at around 3.00pm.

Note how densely packed they are compared to the pen in the foreground and the stand above.

The moment I turned on the TV, it was clear something was horribly wrong. The commentators sounded shocked and bewildered. Instead of players on the pitch, there were fans milling around or running across the pitch carrying people on billboards doubling as stretchers. There was only one ambulance making its way through the crowds and I began to panic.
However my panic was nothing compared to those with families and friends present and who were also watching or listening to the unfolding events. One of them was Alexandra Penk who's fiancé Carl Rimmer was at the match, "They had known each other for four years and recently became engaged. They planned to marry in late 1989 or at the latest early in 1990. She knew he was at the match and would be on the Leppings Lane terraces. She saw television, in her sister's house and knew instinctively that her fiancé was in trouble. She continued to watch in the hope of seeing him but did not do so. She was told at about 11 p.m. that he was dead." (Alcock v Chief Constable of South Yorkshire [1991] UKHL 5)

Carl Rimmer was one of  95 men, women and children who died at Hillsborough that day.
Yet, before the dead had even been buried, the cover-up and smear campaign had begun. The police blamed violent, drunken, ticketless Liverpool fans for causing the tragedy. The Sun newspaper repeated the police's version of events under the banner headline "The Truth" smearing the reputation of Liverpool F.C and the city itself and a new chant of, "You killed your own fans" began to be heard on football terraces.
When the Chief Constable of South Yorkshire Police admitted negligence in respect of the deaths and physical injuries, sixteen separate claims were brought against him for damages for psychiatric injury by those whose loved ones had been at the match and who had, like me, heard the radio reports or watched the live or recorded TV footage. All their claims for damages failed, but ten claimants went on to appeal to the House of Lords.
I was at the College of Law when the case was heard and we studied the rulings.  Significantly, the Lords referred to 95 victims of Hillsborough because the 96th victim, Tony Bland, was still alive at that time.
Tony Bland was 18 years old when he was caught in the crush at Leppings Lane. He suffered severe anoxic brain damage and was admitted to hospital where his condition was consistent with being in a vegetative state. Despite "excellent medical care," he showed no signs of improvement so the medical team headed by Dr Howe, and the Bland family decided that treatment should be withdrawn. However the Coroner objected, notified West Midlands Police and they advised Dr Howe that he would be charged with murder should treatment be withdrawn. That meant that the Bland family had to apply to the High Court for permission to turn off their son's ventilator.  The High Court granted it but the decision was appealed by Airedale NHS Trust and once again the House of Lords was asked to rule on a Hillsborough case.
In what became the landmark case of Airedale NHS Trust v Bland [1993] AC 789,  the House of Lords agreed with the High Court and ruled in favour of the family. Tony Bland became the first patient in English legal history to be allowed, by the courts, to die and this is still an important case in the right to die cases.
On 22 February 1993, Tony Bland's life support was switched off.  He died on 3 March and became the 96th victim of the Hillsborough disaster. A new chant was heard at football matches and the families of the deceased and Liverpool fans fought on to clear the names of their loved ones and the club itself.
I had relegated Hillsborough to a source of important judicial decisions then one day I was bought up sharp.
I was going out with a diehard Spurs fan when Jimmy McGovern's docu-drama, Hillsborough was repeated on ITV. When it was trailed on TV I told Rick I wasn't interested in watching and repeated the now notorious lies in the Sun newspaper.  He hit the roof.  It turned out that he had been in the Leppings Lane terraces during the FA Cup Semi-final between Tottenham Hotspur and Wolves in 1981 when the Spurs fans were involved in a non-fatal crush when too many fans were penned in. He felt deeply for the dead and injured Liverpool fans and the programme made him cry.
Last week I cried when I heard details of the Hillsborough Independent Panel's report in the event and learnt how 116 of the 164 police statements had been amended to remove or alter comments unfavourable to the South Yorkshire Police;  how the same process was applied to statements by South Yorkshire Ambulance Service; how there had been a deliberate campaign to deflect blame onto the fans when the "vast majority of the fans on the pitch assisted in rescuing and evacuating the injured and dead"; and how 41 of the 96 victims could have been saved had there been a prompt and proper response by the emergency services.
The Panel completely vindicated the Liverpool fans and stated that the Hillsborough tragedy "should never have happened."
Following the report, the verdicts of accidental death was quashed, which opened the way for this new inquest to start on 31st March 2014.
Regardless of what the jury decide in a year's time, the message is clear; injustices, when exposed, must be put right.

Thanks for dropping by and see you after the Easter holidays.
Posted by Liz Coward at 21:49