A day in the life of William Earl, a beach resident.

Hello and welcome to my blog. Lots has happened since my last post. I've mastered the stairs, learnt how to use the wheelchair and installed a desk and footstool downstairs. Unfortunately, that's about all I can share with you about life with a broken leg because I've been advised not to say anything more by my lawyer.
Whilst spending all my time learning to live with a disabilty, I've missed Shoreham's last two big events, Riverfest and Shoreham Airshow. I've also failed to pass on the news that EON's application for Rampion offshore windfarm has been granted. Building should start next year.
Now, before the summer holidays, I was in the middle of a series of "A day in the life of," and today it's the turn of one of Shoreham Beach's oldest residents. 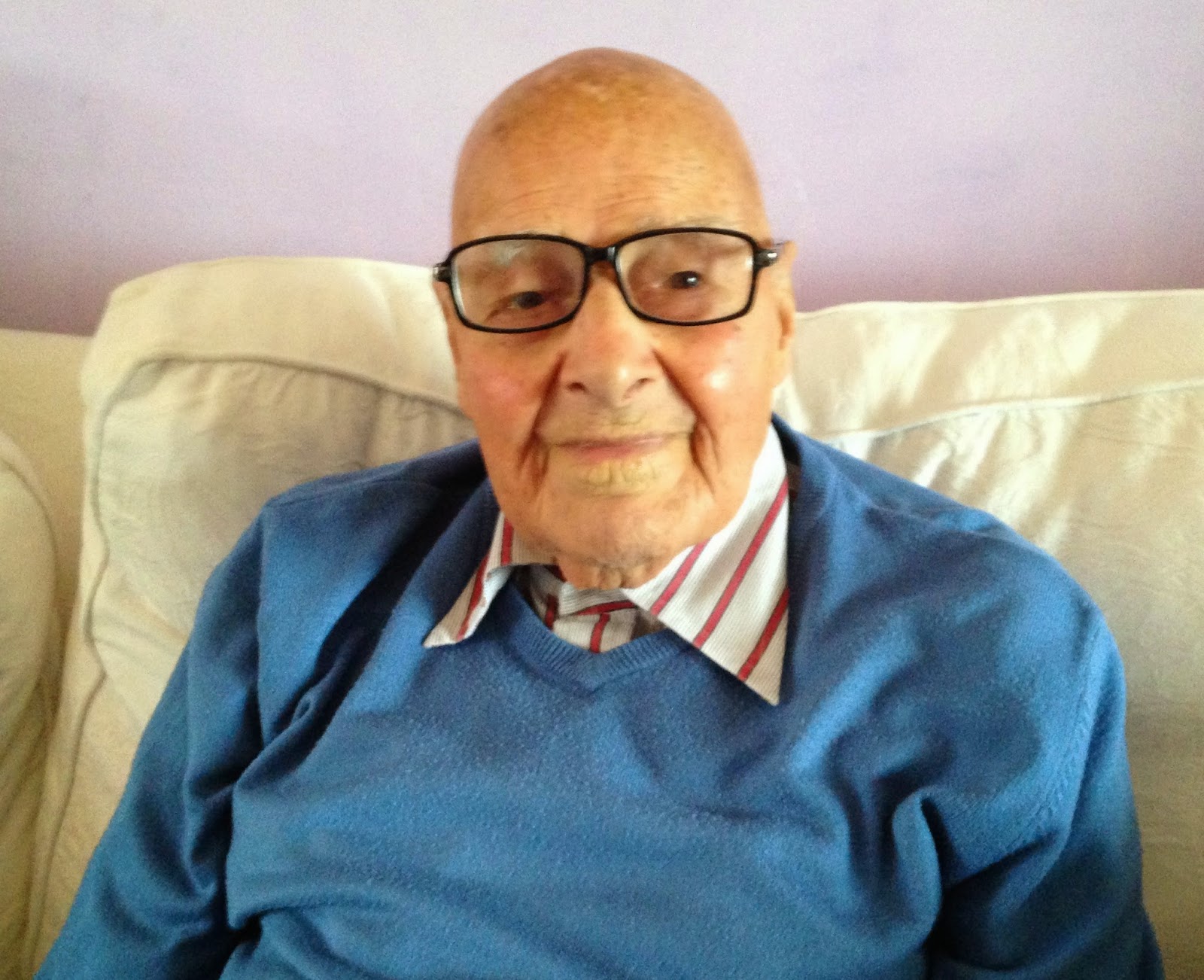 William Earl is 99 years old and has lived on the beach since 1956. His first wife, Mary, died in 1986 and he is now married to Judith, a Hungarian, who lives between Germany and Shoreham. William has three grandchildren, eight great grandchildren and one great-great granddaughter.

" I had a triple by-pass operation and the doctor said I was lucky to be alive, so everyday now is a bonus day.
I’ve had 18 years of bonus days and when I wake up in the morning I say “Another day. Let’s make the best of it and be as happy as I can. On a typical day, I'll get up at about 8 o’clock in the morning and make a cup of tea. I take it back to bed for an hour or so and just lay there thinking about the past and if there is anything special that I’m doing that day.
I’ve always kept a diary, even when I was in the Eighth Army and you were not supposed to. My whole life is in my diary. Each day of the year, I can check back to see what I was doing on that day. For instance, July 2nd was a lovely day, so I took my chair out into the garden, poured myself a beer and recalled how very, very special that date had been in my life. On 2nd July 1940 I was called up to join the medical corps and served in North Africa and Italy. I managed to survive the war but I was very lucky. On the same date in 1956, my first wife, Mary, and I moved to Shoreham Beach, our new home. Mary had a lot of heart and lung trouble and the doctor said that she would have a longer life if we moved out of London to the South Coast.  Then on 5th July, I remembered how in 1946, I was demobbed from the Army after 6 years, and on July 7th, I re-lived the time that, 16 years previously, Judith, my second wife, and I had gone to the Garden Party at Buckingham Palace and had tea with the Queen.
Mornings are a relaxing time of the day. That's one of the pluses about living independently, you can get up when you like. So, if I feel my legs will make it, I get up about 9 o’clock, have a shower every other day, a shave and make myself respectable in case my dear Liz calls in to see me.  She cares for me and looks after me and helps me in so many ways and it's because of her help and the great help of my neighbours, especially Steve and Mary Coward, that I can still live here.
After breakfast, the morning is spent dealing with all these wonderful adverts and letters that say, “You’ve won £50,000!” I just put them in the rubbish bin.
Sometimes, when the weather is good, I can go out on my mobility scooter. I go up to the shops and have a ride around by the beach and get some fresh air to try and wake myself up. Then I have a light lunch and then, unless I’m out or somebody calls to visit me, a sleep. That seems to set me up for the evening. I can still cook a meal, when I feel like it, although it is getting a bit more difficult now and I sometimes go for a fast food.  Maybe they’ll be one or two phone calls after dinner. One of these will be my daily chat to Judith if she's away in Germany.

I don’t watch too much television, only the sport. I love sport. I played football quite a bit and tennis and so on but the programmes of today, I shouldn’t say this, but if you take out all the soap operas, which I don’t watch, all the cookery programmes, which I don’t like at all, and all the antique programmes, which are very interesting of course, but what’s left? Not much at all.  However, I have quite a big collection of DVDS and classical works of music, so I’ve got entertainment at my fingertips.
By 9 o’clock at night, the old eyelids begin to fall. Time to say, “Well done, you’ve lived another day.”  I hope that I wake up the next morning.
I’m a lucky man really. Here I am, enjoying all the memories of a wonderful life. When you reach the age of 99, you’ve really had a full life. I’ve suffered so much sadness, losing my wonderful wife, Mary, after 44 years of marriage and our two sons, all within seven years of each other, yet I’m so very thankful that I’ve reached the very heights of happiness in so many ways.
People said to me, “What do you say of life? I say, You may only have a small circle of life and die when you’re 30 or 40 years old, but it doesn’t matter. You’ve got a life to live and you’ve got to live it to the full.  Always try and do your best and always live and let live.”
I hope that you have enjoyed, this, the last in the current series of, "A day in the life of," and next time I'll be chatting to Colin Baker CBE about his role as Corporate Sponsorship guru for Shoreham Airshow.
Thanks for dropping by and see you soon