Hello and welcome to my blog. I've not posted recently, (broken ankle, nuff said), so I'm going to dive straight in with an introduction to my current writing project, William Earl: Memoir of a World War Two Nursing Orderly.
You may be familiar with the name because William contributed to the last series of, "a day in the life of..."
William Earl was born in 1915 and had just celebrated his 25th Birthday when he joined up. It was 1940, and he enlisted just after the catastrophe at Dunkirk. Defending the country against the threat of an imminent German invasion took precedence over training, so William entered active service immediately. 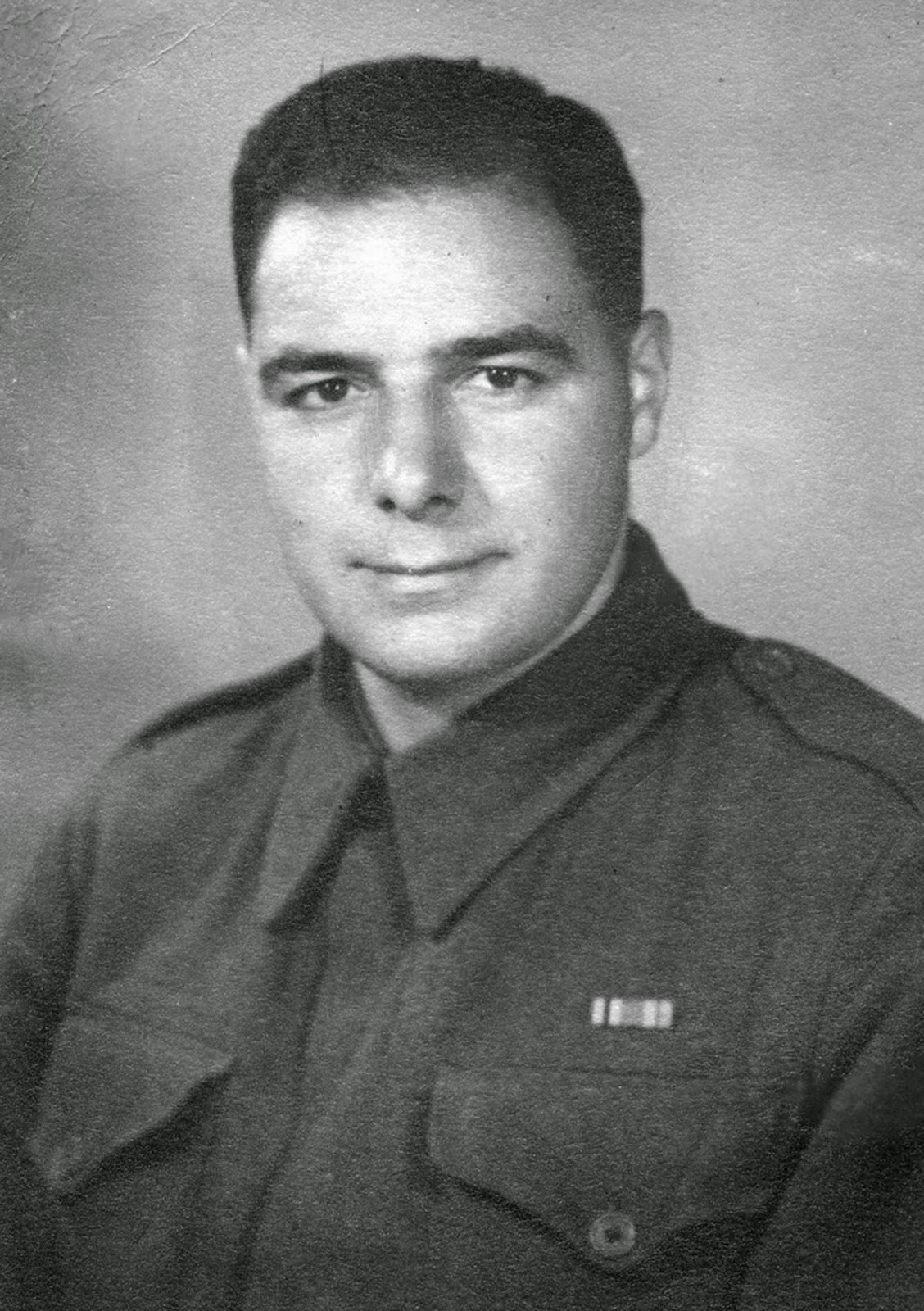 3782155 Pte William Earl R.A.M.C
"We would train during the day and at night we’d be in a little tent in the middle of a field armed with a pickaxe handle and whistle to fend off German paratroopers. The whistle was to give a warning blast if we saw any Germans. If we did, the man in the next field would hear and give a blast on his whistle, and so on, until it reached an army unit. What they expected us to do with the pickaxe I never really found out.
The whole thing was crazy yet funny; there was me, one minute in my bed at home, the next in the middle of a field ready to fight off an invasion."
As an experienced pharmacy assistant, William was assigned to the Royal Army Medical Corps and attached to the 56th (London) Division, part of the Eight Army.
He was posted to a Field Ambulance, a mobile medical unit which followed an infantry  brigade into battle, so when the order was given in August 1942, he was one of the 5,000 men in the 56th, who assembled at Liverpool docks and embarked on RMS Franconia II for an unknown destination. He left behind his beloved wife, Mary, and their newborn son. 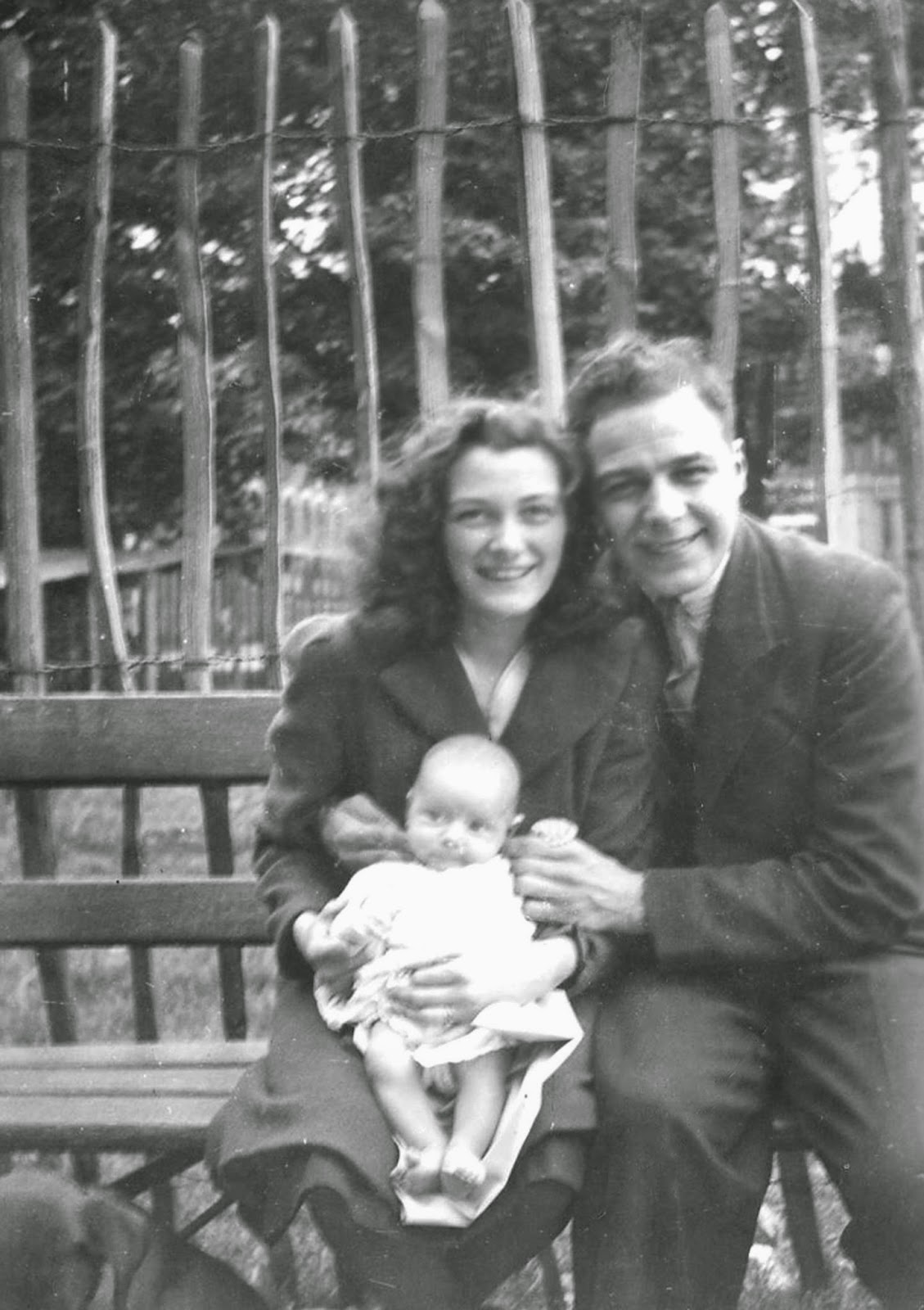 Mary and William Earl with their son David.
1942
"I got to see David twice before I left but I never had a chance to say good-bye to my darling Mary."
The journey across the Atlantic was perilous. German U-boats were ravaging Allied shipping so the army took the precaution of sending the men in one convoy and their arms and equipment in another. The men's convoy crossed unmolested and during the lengthy journey William formed a deep friendship with Frank Allen, a fellow Nursing Orderly. 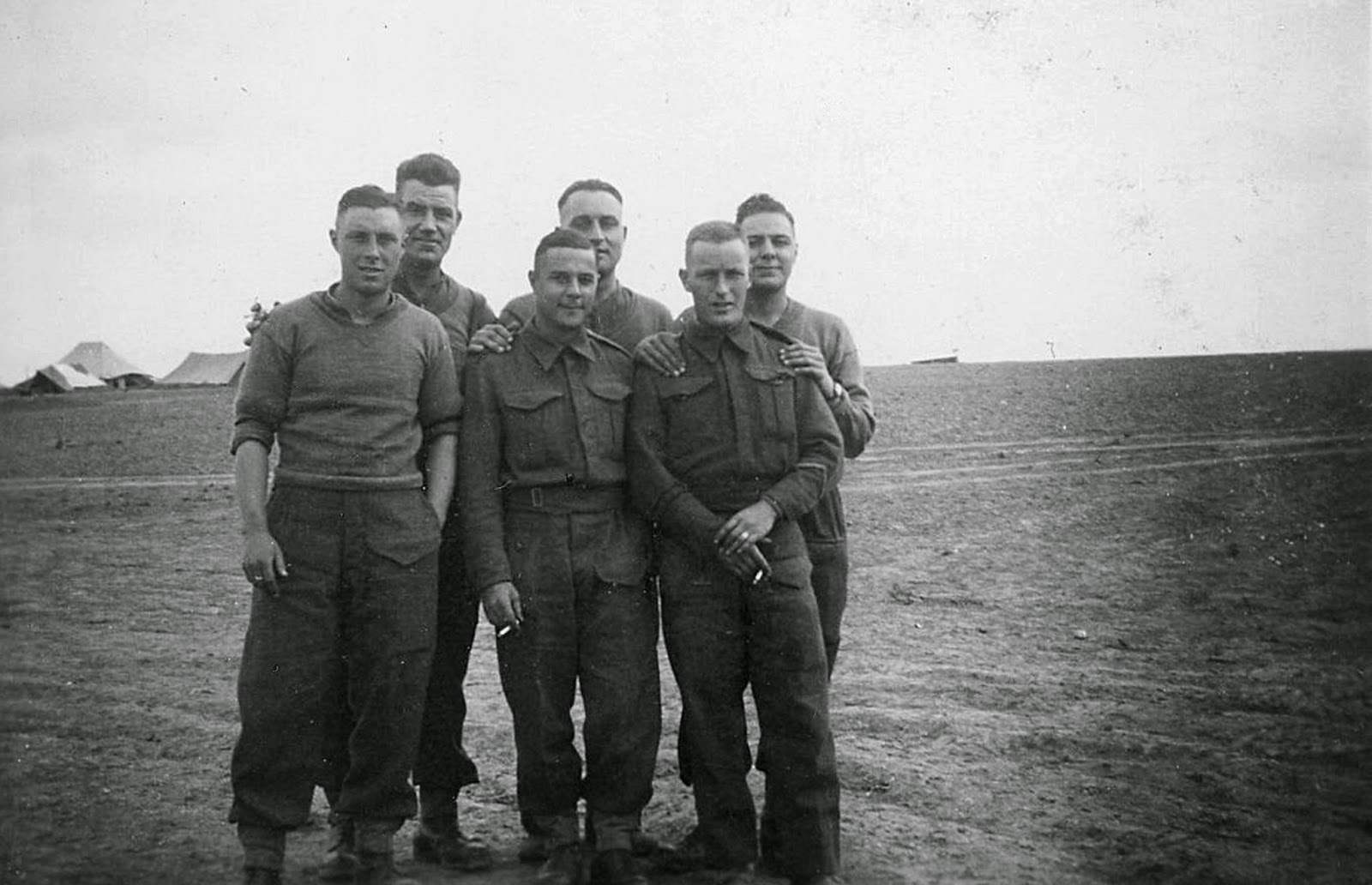 Back row far left - Frank Allen, far right William
1943
"What brought us together was our shared love of football. He was a boot-maker and apart from football, I don’t think he had much experience of life, so he would listen to me a great deal because I’d lived in London and life was so different there. He’d listen and nod his head and smile. It was a pleasure to be in his company and we would talk about lots of things, our early years, sport, my musical activities, our jobs, and how we met our wives.
I had no brothers or sisters but, in Frank, I found a person who I would have quite happily embraced as a real brother and from that point on, we became inseparable."
Upon their arrival in Capetown, the men learned that the other convoy had been attacked. Their arms and equipment had been sunk incapacitating the Division for the next five months. Once re-equipped and re-united, the Division speedily set off from Iraq to join the Eight Army as it confronted the Axis forces in Tunsia.
William's Field Ambulance arrived near the frontline on 22nd April 1943, and entered the fray the following day.
"We’d spent years practicing what to do when we came under fire but nothing prepared us for the real thing. In training we knew we were safe. The infantry fired blanks, and we knew they were blanks. The Sergeant Majors were always yelling at us to GET DOWN! LAY DOWN! But now they are using real ammunition and there was no-one there to tell us what to do. We were facing death at any moment so we had to act instantly. We could not afford to make even the slightest mistake."
William's section was responsible for treating and collecting casualties from the Regimental Aid Posts positioned on the frontline, and for transporting them down the evacuation chain. Although constantly in close proxmity to the troops, the R.A.M.C men  were in the Army, but not of the Army.
"All the time it was drilled into us; we were not there to fight the Germans. Our job was to save the wounded in accordance with the Geneva Convention. All of them were human beings and we could not discriminate. That meant that we had to treat a German soldier, an Italian soldier, or any other enemy soldier, as if he was one of ours."
Likewise, the Germans were signatories to the Convention so when the Germans surrendered on 12th May, the British and German field ambulances established a joint dressing station to treat all the battle wounded.
"It was quite emotional when we arrived, and we all said, “Hello,” and shook hands. Medical men had no enemies and the Germans had kept to the Geneva Convention so we were quite happy to join them. The joint dressing station was much bigger than ours and for a week or so we worked side-by-side and we got on very well together. We shared our rations and I tasted sauerkraut for the first time in my life." 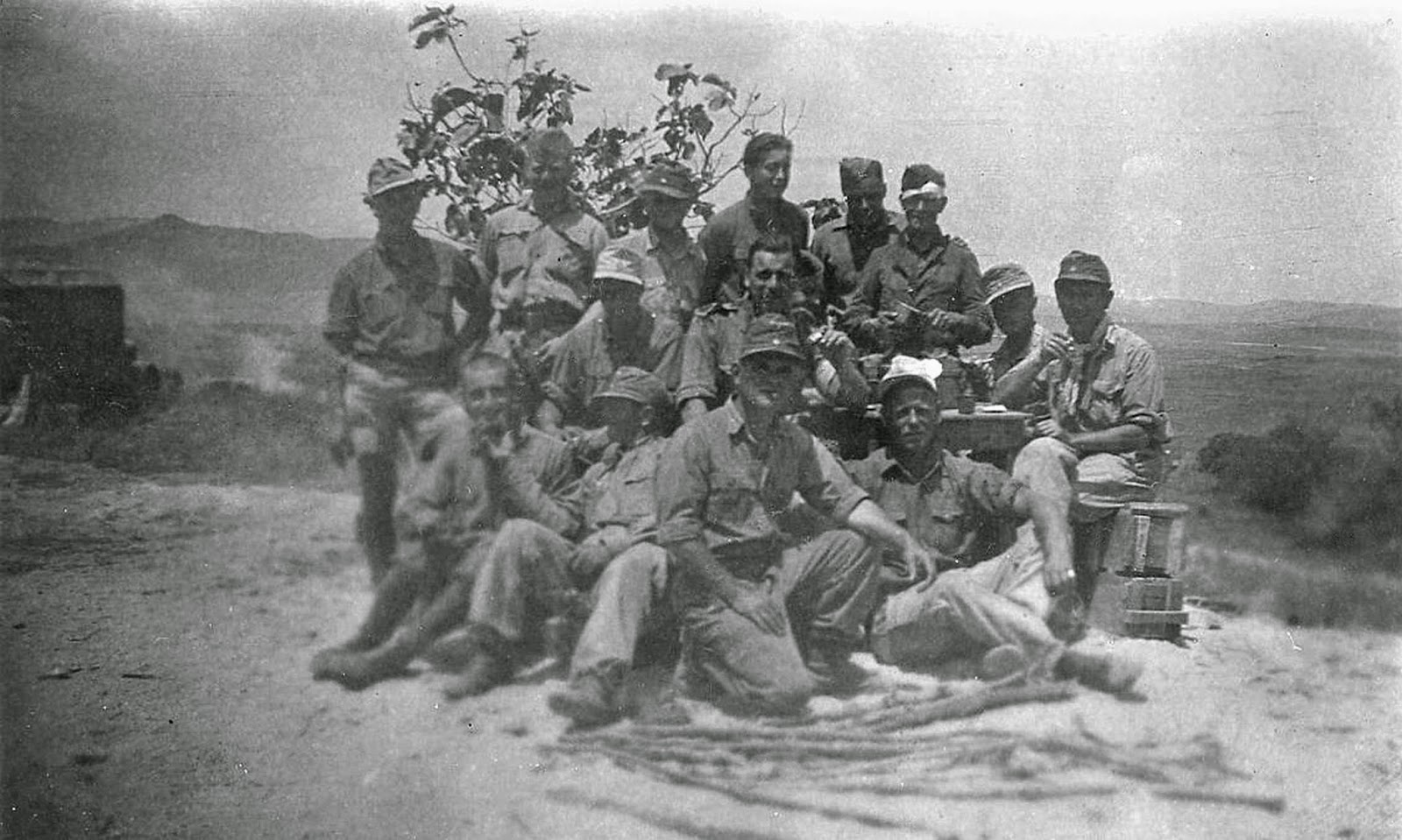 Men from the Anglo-German dressing station.
Tunisia May 1943
Despite the victory in the North African Campaign, the Allies lacked the resources to take the fight to France. Winston Churchill, therefore, persuaded the Americans that, in the interim, they should attack the Germans in Italy. They reluctantly agreed and without a definite plan in place, the Allies launched the Italian Campaign.
The Eight Army was divided up and one of the 56th's infantry brigades headed off for Sicily whilst the other two joined the newly created Anglo-American Fifth Army.
"We were happy to be part of the American Army in Italy because their rations were so much better than ours. They had steak and kidney puddings in their tins, whereas in our rations we had meat and veg in one tin and a few dried biscuits and it was one tin between two of us."
As the Eight Army embarked for Sicily, the Fifth commenced training for the amphibious landing at Salerno, on the Italian mainland.
"Enfidaville had been a baptism of fire so by the time we finished training we thought, "We’re battle-hardened troops now, we can cope with anything." Then, of course, came Italy..."
William's memoir is almost finished and as he enters his 100th year, speed is of the essence. Just as important, though, is the obligation to do his and his comrades' story justice. Their selflessness, courage, and spirit is worthy of praise equal to that heaped upon the fighting troops, but it's seldom given. Pehaps people are confused because theirs wasn't a conventional role. It was a fight to control the impulse to run or recoil; to discriminate; to retaliate; to survive; or give up.
William, however, is clear about the part they played. 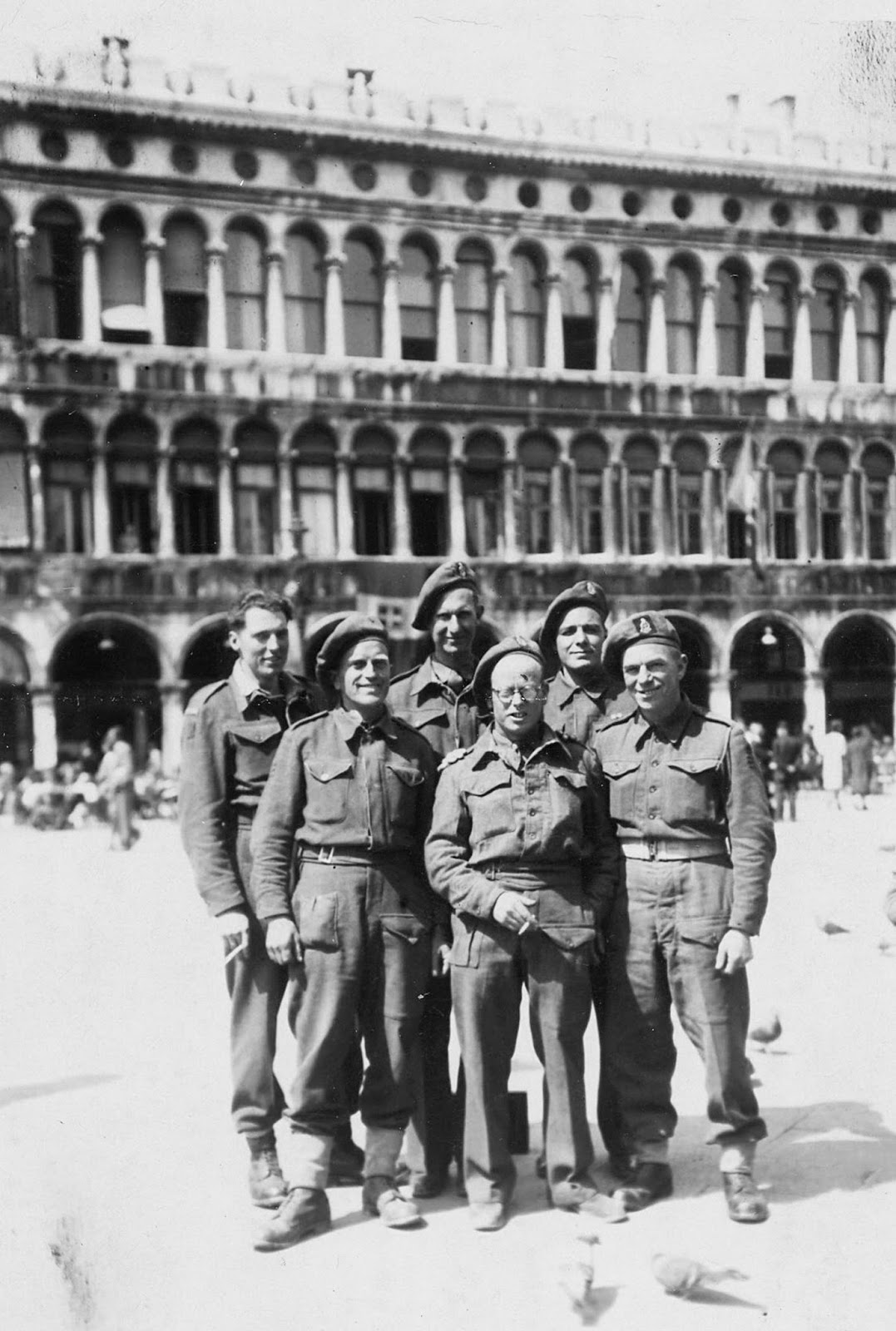 William and his comrades.
Venice, May 1945
"We fought too. We fought to save the wounded."
If I had broken my ankle on an Italian battlefield, not a French staircase, it would have been a man like William who would have helped me. This thought is with me as I write the final chapters of William Earl: Memoir of a World War Two Nursing Orderly. Once completed, the next battle will be to find a publisher. That is the stuff of another posting, in the meantime,  I wish you a peaceful and reflective Remembrance Day.
Thanks for dropping by and I look forward to seeing you next time with a feature on the 2015 Adur Festival.
Ta-ra for now.
Posted by Liz Coward at 12:49