Hello and welcome to my blog. Last week, I mentioned that the Ferry Road and Lower Beach Road redevelopment was under threat and that we needed to attend the meeting of the Adur County Local Committee (CLC), to show our support.
Consequently, a few of us went along to the meeting, including Adur's Executive Member for the Environment, Councillor Keith Dollemore,  Cllr Liza McKinney, district councillor for Marine Ward and Joss Loader, Chair of Shoreham Beach Residents' Assocation (SBRA).
We weren't there long because our item, "Ferry Bridge - proposed Traffic Regulation Order (TRO)," was taken off the agenda. A legal issue had just come to light concerning a public hard, (an ancient right of way allowing access and launching rights to the river). As only Parliament can agree to close it, that was that. Ferry Road was off the agenda. We could speak if we wanted and the hands flew up.
Cllr Keith Dollemore was the first on his feet.  He registered his dismay that it'd only just been discovered. Next up was Cllr McKinney who repeated what Cllr Dollemore said then appealed to the committee not to withdraw the item but split the project up into two halves so that the public hard didn't hold up the rest of the development. The committee was having none of it. Mr Robert Baker and I limped up in third and fourth place. He told the committee that he thought that he owned the land outside his unit so no TRO. I said that those who objected should be told the correct information to see if they still wished to object. With that the Chair ended further comments and we all trooped out.
So where does that leave us now?
In short, no Lower Beach Road and Ferry Road improvements anytime soon and some of us are not taking it lying down.
We can't do anything about the public hard, but the TRO is another issue.
We need the Traffic Regulation Order, (TRO), so that Adur Council can commence work on the improvement scheme but first it has to be signed off by the Local County Committee.
Mick Clark, County Councillor for Saltings, (Shoreham Beach and parts of South Lancing), will not sign it off following lawful objections from three traders in Ferry Road, a hairdressers, an accountancy firm and a specialist embroidery shop, who sent out an effective mail shot which gathered 274 objections to the TRO, (see previous blog).
They say that they will struggle to remain trading without the four parking spaces immediately outside their premises. They will lose customers and therefore will have to reduce staff numbers.
Cllr Clark has suggested that a new parking bay is therefore provided for them at an additional cost of £37,000.
Incidentally, the nearest public car park to the traders is approximately one minute's walk away and there is on street parking in Ferry Road.
Thanks SBRA for helping to clarify the situation.
So where does that leave those of us who want the job finished?
One word, protesting.
At this stage, it's a two pronged initiative which has come from some of the members of New Shoreham by Sea Facebook page.
The first prong is a footwear protest to show that we want somewhere safe and decent to walk. Perhaps wheelchair users could add a spare wheel to show the importance of proper access. 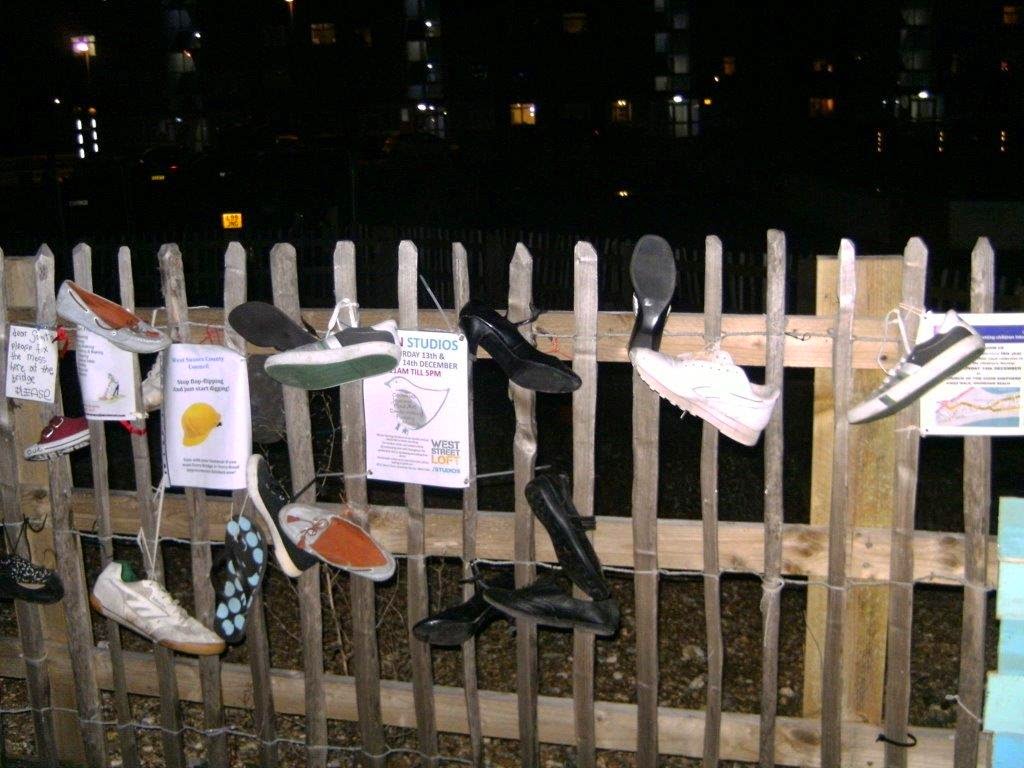 Footwear protest on the south side of Adur Ferry Bridge.

The second is a petition. When drafted, it'll be available to sign in a paper and e-format.
You can also contact WSCC facebook page to have your say, your County Councillor, (ours is Mick Clark), local Councillors or our MP, Tim Loughton.
If we just ask for the work to be done,  the public hard will bring that to a flying stop. However, if we ask for the TRO to be split up to cover everywhere except the public hard, we may get somewhere.
This is an Adur issue and not everyone has access to the web, so please pass the word on.
This scheme is too important to be shunted down or off an agenda.
Thanks for popping-by.
Have a great week and see you soon.
Posted by Liz Coward at 16:15