Hello and welcome to my blog. I had hoped that my last blog of 2014 would be full of Christmas good cheer, but I'm afraid that its' been derailed by confirmation of rumours concerning SJM Ltd's plan for the proposed two-day music festival at Shoreham Airport.
Initially, the rumours were just about why no-one knew about the application until three days before the end of the 28 day consultation period. The answer may be due to SJM's failure to display the notice in accordance with the Licensing Act 2003 Regulations.

This is what was displayed. 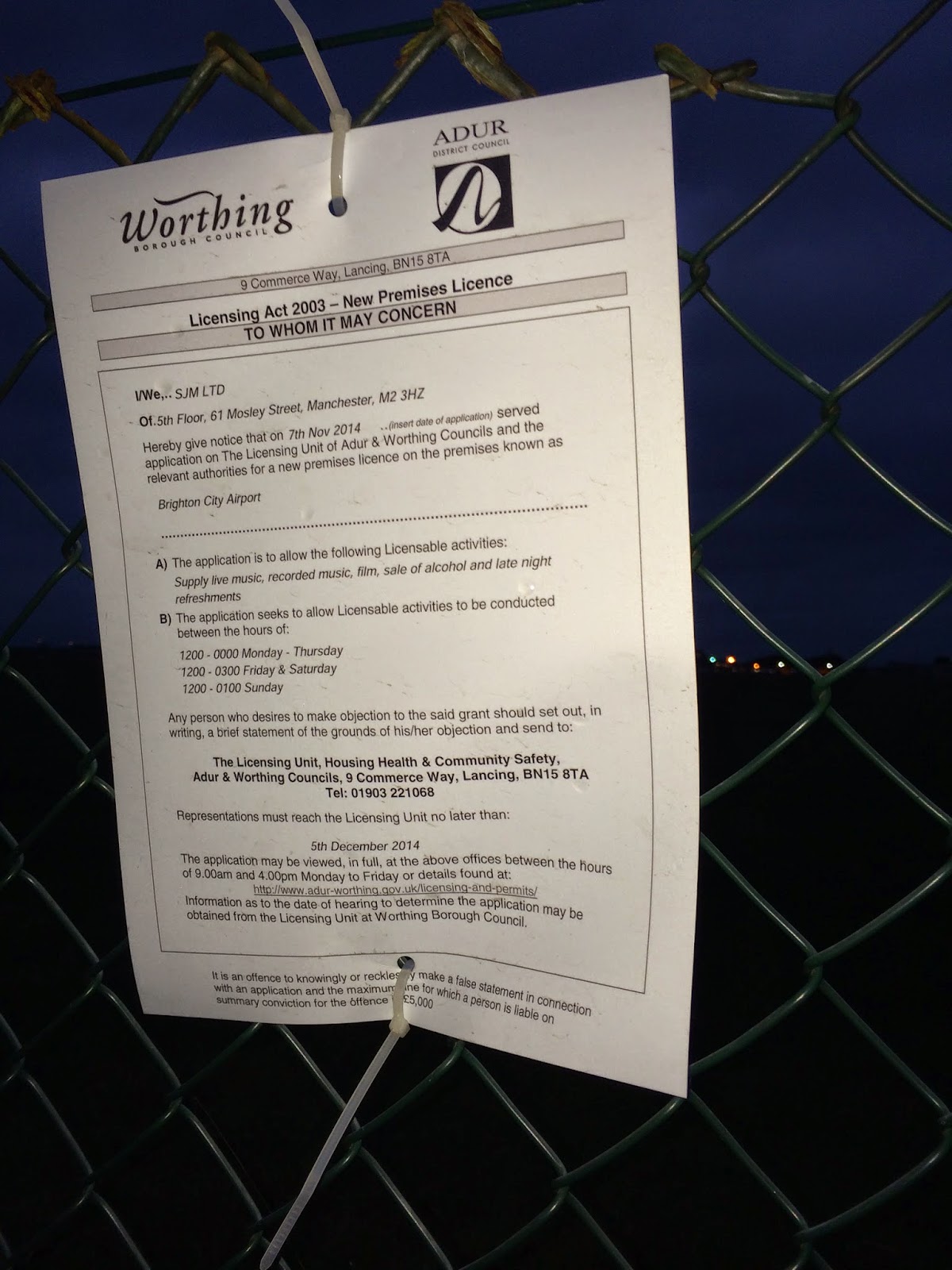 It should have been displayed on pale blue paper in font size 16 and in a position which could be conveniently read from the exterior of the premises. Mere detail? No. The Licensing Regulations were drafted this way so that the notice was eye-catching. That SJM's notice was not easily seen, even by those who were looking for it, bears this out.
Has the Licensing Unit at Adur District Council asked SJM to re-advertise in accordance with the law? Not yet. Why they have not, is a matter for the Licensing Committee.
SJM has not given us any information on the type of festival it has planned. Rumours have  therefore circulated on social media that it is going to be like V-Festival.
V-Festival is a huge music festival held in two locations simultaneously with the artists performing in one location on the first day and at the other location on the second. However, it can't be a V-Festival because that's always held in August and SJM have said that they want the Shoreham Airport festival to take place on the weekend of 6th and 7th June 2015. So what other festivals do SJM run in June?  The huge and highly contraversial Parklife and this, according to my sources, is what SJM plan for Shoreham Airport.
Parklife entered the festival scene in 2010 at Platt Fields in Manchester as a one-day dance music festival aimed at a student audience. 15,000 people attended. The following year it was extended to a two-day dance music festival with a capacity of 15,000 per day.
The Secretary of Friends of Platt Fields commented at the time, "We will see massive lorries churning up the park and an immense volume of people that is horrible for people living around who don't like it. The current entertainment licence specifies 10 days of major events a year but it has been pointed out that the disruption time for the park is alot more than 10 days. Parklife will be 18 days alone, of which the concerts will only be recorded as two."
Platts Field only hosted Parklife for three years because by then it had swelled to a 50,000 strong crowd. Simon Wheale, a local councillor explained, "The essential problem is that Parklife is a major national music event, with an international line-up of acts, which the council has supported, despite the venue not being big enough or in the right location, to take the infrastructure necessary for an event of this size." Parklife's co-director was sanguine about leaving Platts Field and moving to Heaton Park, "students will follow the Pied Piper of Parklife whereever it may take them."
And they did. In 2013, at the bigger, better Parklife, the students didn't just come from Manchester, they came from Birmingham, Bradford, York, London, Bristol, and Durham. In fact, from all over the country. This is what Parklife 2013 looked like. The following year, it looked like this. It has gone from strength to strength but so has the local community's resentment of the impact the festival has had on them.  It has reached a point where Heaton's local MP, Ivan Lewis, has called for Parklife 2015 to be banned and a petition will be presented to Manchester Council calling for its immediate cancellation.
So, are SJM hoping that Shoreham will be hosting Parklife, or a version of it, in 2015? Yes, if my sources are right and the plan is that, just like V-Festival, Parklife festival will take place at two locations simultaneously and the acts, like Snoop Dogg, Camo and Krooked and DJs like High Contrast and Carl Cox, will play at one venue on one day and at the second venue on the other. I understand that Shoreham Airport is SJM's second venue and hence, the reason that the dates proposed for the Shoreham festival co-incide with those at Parklife Manchester.

If you agree with me, please contact
the Chairman of the Licensing Committee, Cllr Carson Albury,
on email at carson.albury@adur.gov.uk
or in writing at Democratic Services, Adur and Worthing Councils, Worthing Town Hall, Chapel Road, Worthing. BN11 1HA

Well, what a note to end on. Just one more thing, the campaign meeting to get the improvement works completed on Adur Ferry Bridge and Ferry Road is tomorrow, Thursday 18th December at 7.00pm at Tom Foolery High Street Shoreham-by-Sea

Thanks for dropping by and have a wonderful Christmas and a very happy New Year.