Tom and I were in Brighton when tragedy struck at Shoreham Airshow. 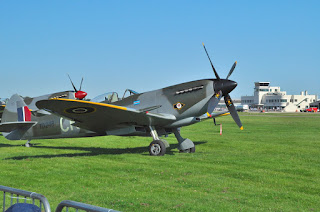 Richard, my husband, was there and rang me 16 minutes after the impact.
"A jet's just crashed onto the A27. Flying has been suspended but we've been told to stay put."
He eventually returned home at 7.00pm but was too drained to cross the threshold.
"It was horrendous," was all he could manage so I cuddled him and bought him inside.
Next day, we went to mass, then self-conscientiously bought some flowers to put near the crash site. Richard wanted to go alone, so we waited in the rain as he walked across the Tollbridge to the police line beyond Ricardo's. The Samaritans were there, but he took solace from seeing the area treated with such care and dignity. It gave him some peace. Not healing, just peace, and an aching sadness.
They are right to say that this disaster has affected the whole community. Shoreham Airshow is one of the town's most popular events and thousands of residents loyally turn up year after year. Even the airport staff love it. That's why, on 22nd August, both eastbound lanes of the A27 were jammed by 9.30am and hundreds of Shorehamites excitedly marched along the roads with picnic chairs slung over their shoulders and cameras bouncing on their chests. It was these people who witnessed the Hawker Hunter THUD! THUD! into the A27, heard car fuel tanks explode and the pitiful wail of sirens.
Hours later, Tom and I witnessed the impact on them as we wove through Shoreham's gridlocked streets. They were unmistakable. Grim faced and solemn, they clutched plastic "Shoreham Airshow" carriers or dragged tired and tearful children behind them.
We have all been affected by the Airshow disaster in differing ways and varying degrees. It's not just because we too could have been on the A27 at 1.20pm, it's because something that we hold dear has brought horror and grief and most of us know someone who was directly involved in the rescue effort.  I know that they would have done all that was humanly possible to save those they could and it's to them that this blog is dedicated.
Finally, my heartfelt condolences go to the families of Matthew Grimstone, Jacob Schilt, Matt Jones, Maurice Abrahams, Mark Reeves, Tony Brightwell, Mark Trussler, Daniele Polito, Dylan Archer, Richard Smith and James " Graham" Mallison. May they rest in peace.
Thanks for reading and I'll be back in a short while with a post on Shoreham Dogs Trust.
Ta-ra for now.
Posted by Liz Coward at 16:46