We have finally moved to Singapore after months of frantic activity and precious little activity on this blog. I feel bad about that, so to make amends here is a super sized blog with oodles of photos and a brief account of how we've ended up moving half way across the world.
Last Spring, when my attention was fully focused on preparations for the launch of Blood and Bandages, my husband Richard, an Airbus 320 training captain, was working for Airbus Asia Training Centre in Singapore. 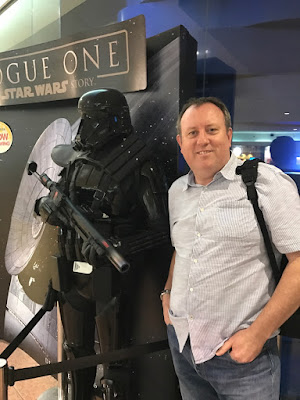 Richard in Jakarta in January 2017. In March - April he would be in Singapore working with Airbus Asia.

He was engaged on a six week contract to train Airbus pilots from various airlines. He had been doing the same type of work for seven years and worked overseas every other month. He rarely returned to the same country so each month had to adapt to another time-zone, culture, climate and airline's practices. It was not an easy gig and it was taking a huge toll on him and our family life. Hence,  when he was offered his dream job with Airbus Asia in Singapore, he seized it with both hands. The clincher was that he would be 'home' almost every day. The prospect of being re-united as a family and couple was thrilling but discussions about the future job offer had to be postponed due to the imminent launch of Blood and Bandages. Thus, when Richard returned from Singapore our attention was fixed on the Shoreham Centre, not the Far East.
The launch was a great success. 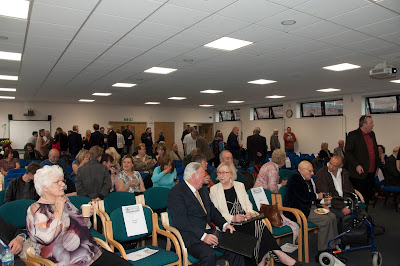 140 people attended the event including family and friends and representatives from the Museum of Military Medicine, Friends of Surrey Infantry Museum and the Italy Star Association. 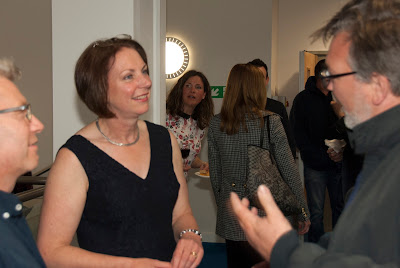 It was a relaxed and friendly evening. On my left is Colin, one of my oldest friends from my College of Law days. 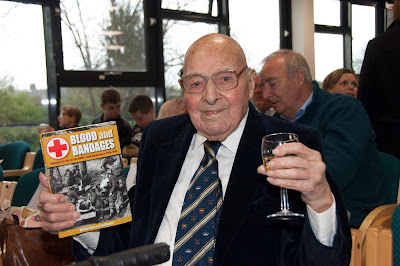 William was on sparkling form despite his recent hip replacement which had left him virtually housebound.

A flurry of press interest and book talks requests followed. 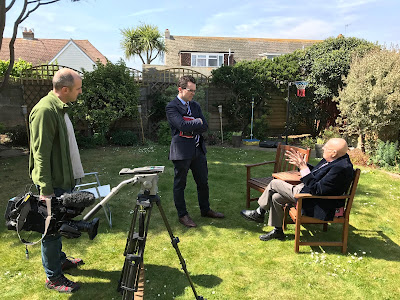 In our old back garden with Charlie Rose for BBC South East Today. 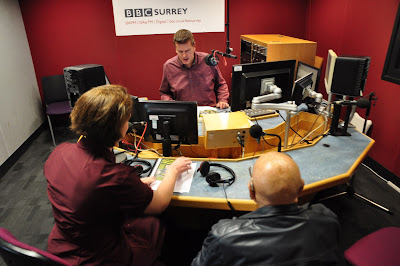 At the BBC's Brighton studios with Mark Carter for BBC Radio Surrey and Sussex. 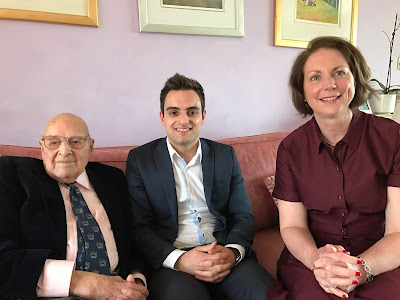 With Christian Hewgill for Forces TV.

William and I were thrilled with the response but between engagements Richard and I discussed the job offer and the implications of leaving the UK. Our greatest concern was the impact it would have on our parents. We were close to both sets as both lived in Shoreham. They had seen Tom grow up and we knew that losing us, particularly when they were in or approaching their 80s, would be a hard blow. We decided to wait until the offer was definite before telling them. It came in June and the news was initially greeted with shock and tears before turning to support and understanding. They had witness the toll nine years of comings and goings had taken on us and were pleased that there was a chance for change. It was also important to tell William, not only because it effected the book, but because we had become very close friends over the years. He accepted the news with grace and sadness mixed with a fierce determination to enjoy what time we had left. So after a much awaited family holiday, Richard returned to work his last contract, a month long assignment to Indonesia. Meantime, I started making plans for our pending re-location. I contacted ex-pats for advice on international schools in Singapore, sought out estate agents to let the house and organised home schooling for Tom's last few months in the UK.  William and I also embarked on a summer offensive to promote the book. 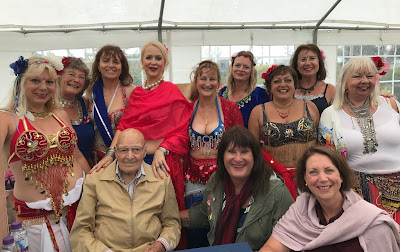 At the Armed Forces Day in Worthing with Sophie Cook and the ladies from Bellydance Rocks. William thought he had died and gone to heaven. 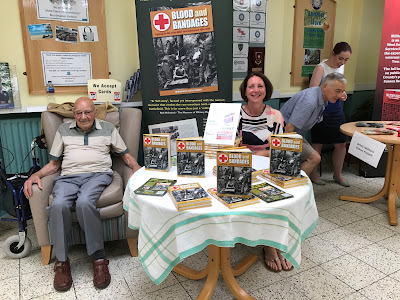 At the Queen Alexandra Hospital Home. We were positioned next to WSCC Library Service and a chance conversation led to an engagement to speak at Shoreham Library. 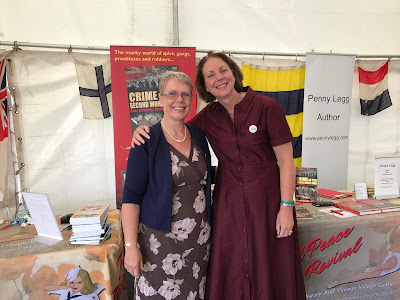 At the War and Peace Revival with fellow author, Penny Legg.

With Richard's start date looming up, we needed to make a recce visit to Singapore to find Tom a new school and us, a new home. Richard flew in to join us direct from Indonesia and it did not take long for Tom and I to fall under Singapore's spell. 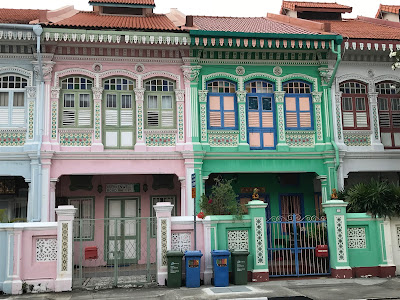 Peranakan terrace in Joo Chiat/ Katong area of the East Coast of Singapore. 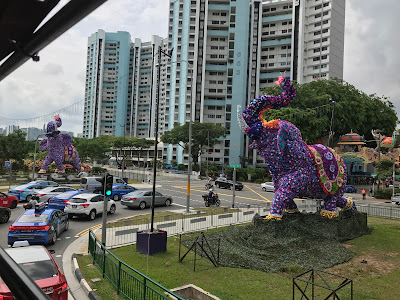 Gateway to the colourful and crowded Little India in Singapore. 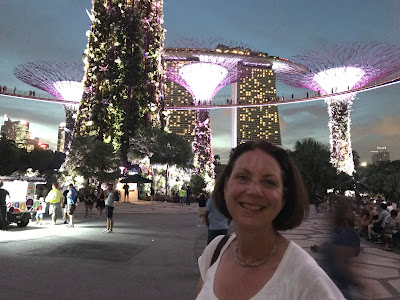 The super trees in Gardens by the Bay waiting for the free light show. 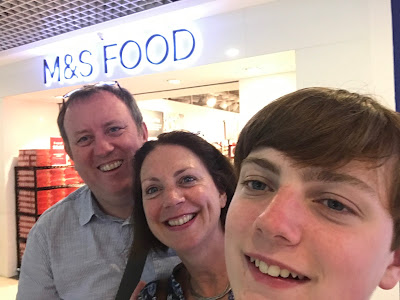 They even had a Marks and Spencer!

Luckily, we returned with both home and school fixed and three weeks later, on 11th October, Richard left to start his new job with Airbus Asia.
At home, the tasks ahead were daunting.  Tom and I were due to join Richard on 6th December so there was eight weeks in which to de-clutter the house and select that which should be shipped to Singapore and that which should be stored; supervise Tom’s home-schooling and ready the house for the new tenants.  It made every past challenge look like child’s play and would have been impossible without our fantastic friends. They pitched in instantly and whole-heartedly. They sorted out the loft; did regular dump runs; packed up the kitchen, bedrooms and study; took countless loads to charity shops and weeded and pruned the garden in freezing conditions. Meantime, Tom impressed his tutors with his thoughtfulness and talents.  On 14th November, what was left of the contents of our home, were packed into a container and shipped off to Felixstowe. 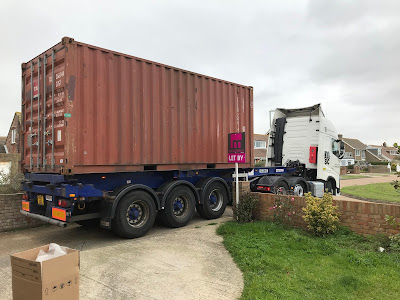 I've never seen such hard and helpful workers as the men from Sante Fe.

With the house now empty, Tom moved in with his grandparents while I moved back with my parents and the decorator started work on our house.
Despite the domestic upheavals, I still had to prepare and practice five book talks and I wish I had been better prepared for the first ones. 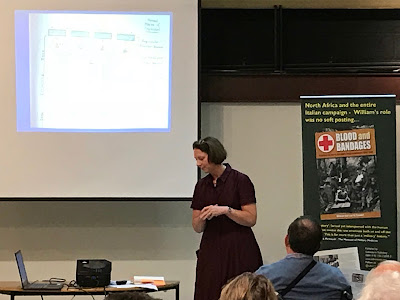 14th October talk with Patrick Soulijaert. I was still learning to give powerpoint presentations.

William contributed to all bar one of the talks regardless of the lateness of the hour and distances involved. It was wonderful and reassuring to have him there and his personal recollection of events added tremendous weight and humour to proceedings. 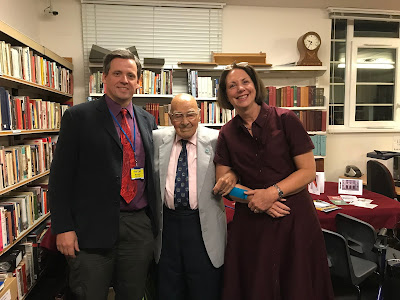 With Ian Bayley of Sabrestorm Publishing after a talk at the Museum of Military Medicine. I'd done so much packing by that stage that I'd got tennis elbow. 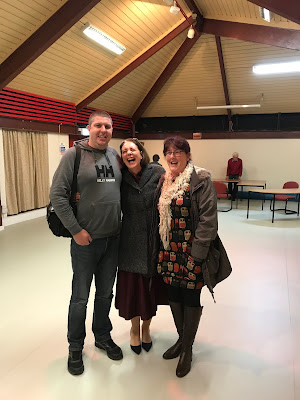 With Sharon Penfold and Gary Baines from Shoreham Fort. They went on to attend two other talks.

The final talk was on a chilly November night before a packed and attentive audience of the 1940s Society in Sevenoaks. William and I were delighted but the evening was tinged with sadness as this was our last talk, and at 102, neither of us was under any illusions about the significance of the event. 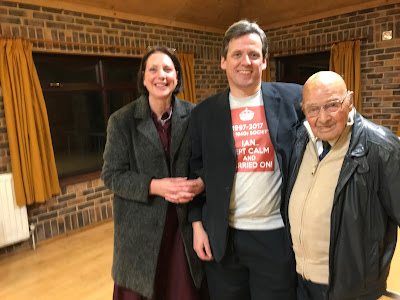 At the end of our final talk in Sevenoaks.

Unfortunately, there was little time for reflection as the next day I embarked on a two-week period of farewells that saw me travel to Guildford, London, Westerham, Hereford, Rhymni and Caerphilly in Wales. Tom stayed at home to continue with his studies, scouts and jujitsu. 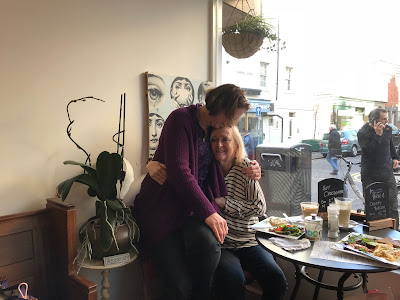 A farewell brunch with Sandie Clark, a dear friend who was so instrumental to the success of Blood and Bandages. 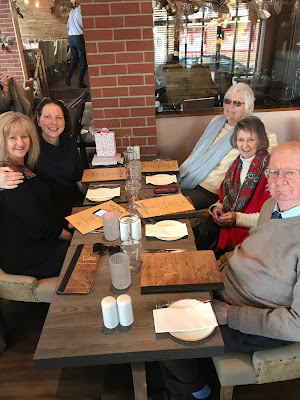 In Caerphilly with my parents, Auntie Mary and glamorous cousin, Anne-Marie. Anne-Marie hopes to come to visit us next year. 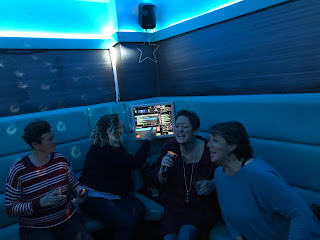 Smashing it at the Karaoke with my girlfriends at one of my leaving dos in Brighton. 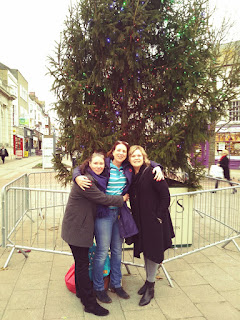 My last day in the UK with two of my great friends, Mandy and Sarah. Shopping, lunch and tears.

It was lovely spending time with such treasured family and friends but the departure date sped up to meet us and on 6th December, Tom and I were re-united at Gatwick where we said a tearful good-bye to our families and began our 17 hour journey to Singapore.
By this time Richard had spent his first month in a hotel and the second in a bedsit. He has found a flat for all of us into which he moved while Tom and I were flying out to meet him.  He was cock-a-hoop when we arrived.

View from our flat on the 26th floor in Farrer Park  Singapore.

We have now been here for a few weeks ago. We haven't established a routine and I feel a bit rootless. That said, we have already been out and about and made some new friends amongst the British ex-pat community. 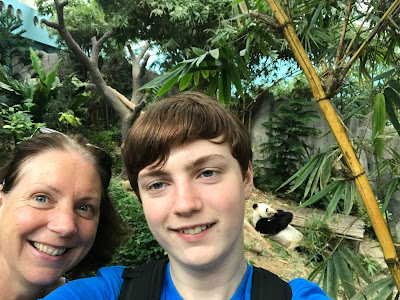 At the Riverside Safari with Kai Kai the giant Panda having lunch in the background. Astonishing. 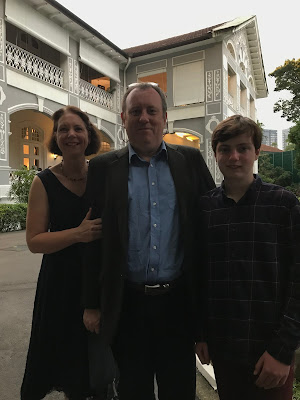 At the carol concert at the British High Commissioner's residence organised by the British Association, one of the most friendly and interesting associations we've ever joined.

Tom has visited his new school and Richard already feels like an old hand. The contents of our house has arrived in Singapore and will be delivered to our permanent accommodation when we take possession on 29th December.
This has been an incredible year and we are looking forward to building a new life together and exploring our new home.
On the writing front, I'll keep blogging, promoting Blood and Bandages and embarking on new writing opportunities. In fact, I've already volunteered to join the feature writing team with BEAM, the British Association's monthly magazine.
Of course, we’ll miss home terribly and have been warned that at some point we'll experience a crushing sense of homesickness. I hope that we will have good friends around us to help us through and will be cheered by the knowledge that we are returning to Shoreham Beach in July.
All that's left to say now is thank you for dropping by. I want to  wish you a peaceful and happy Christmas and a wonderful 2018. Hope you don't mind, but I've got a little present for you.
See you in the New Year with an update on how we are getting on.
Posted by Liz Coward at 05:38