Next stop, Passion for Shoreham.

Hello and welcome to my blog. It's nice to see you again.

I've got lots to get through today, so I'm going to dive straight in. 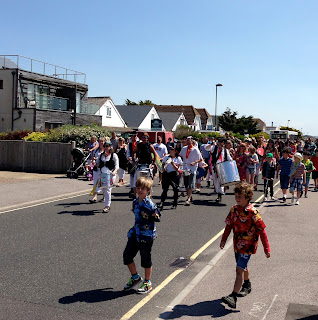 Last weekend was Beach Dreams, and, as always, it was a joyous event. The bands were great, the sun was warm, thousands of good humoured people turned up, and the traffic was a nightmare. In fact, in a rare moment of girl power, I engaged in a bit of traffic control when the shuttle bus got struck at the top of Ferry Road.

Talking of power, from Friday 14th - Sunday 16th June, Passion for Shoreham will be taking centre stage as actors and singers re-enact the life, death and resurrection of Jesus Christ. The plays will take place around the Church of the Good Shepherd, St Mary de Haura, East Street, Marlipins Museum and Shoreham Fort. The Passion starts at the Church of the good Shepherd at 7.00 p.m on Friday and we are encouraged to wear warm clothing and bring something to sit on. On Saturday, the action moves into town. Monologues will be performed in the upper room of the Marlipins Museum at 10.45 a.m and 1.00 p.m whilst the plays will start at 11.00 a.m in East Street. On Sunday, the Passion moves back to the beach with performances starting at 2.00 p.m at Shoreham Fort. Do take a picnic and something to sit on. As the final day deals with the death and resurrection, I'm expecting some powerful performances.

Moving onto another sort of power, the next public consultation on the Rampion Offshore wind farm proposal is due to start tomorrow. E.ON's website has not been updated to show when and where we will be consulted, and nothing has come through the post. However, I understand that they will be advertising in the local and national press. I was highly critical of the lack of effective publicity for their last public consultation, and I know it's early days, but I've got an awful feeling of deja vu.

Right, I have to dash off now because I'm in the middle of writing Bill's war memoir. Bill is a 98-year-old beach resident who served in the Royal Army Medical Corps during the Second World War. His is a  fascinating story of humanity on the battlefield and I'm aiming to finish the book before the end of summer.

I've finally sorted out the new look Vlog, so next week, I'll be back on screen.

Thanks for dropping by and see you next Wednesday.
Posted by Liz Coward at 13:51