Tombstoning off Shoreham's harbour arm; worth the risk?

Hello and welcome to my blog. The summer is definitely here and I've had my first swim in the sea. I adopted the normal drill; hobble to sea, gasp upon entering, wade in before chicken out, and swim furiously to restore blood circulation.  Mad? Well, certainly not as mad as tombstoning.

If you haven't heard of it before, tombstoning is, "the practice of jumping into the sea or similar body of water from a cliff or other high point, such that the jumper enters the water vertically, like a tombstone." Think Butch Cassidy and the Sundance Kid.
The RNLI know that some people can't resist that jump, so they've issued guidance to try to minimise the risk of serious injury, paralysis or death.
Inexplicably, in Shoreham, some tombstoners go one step further. They jump off one of Shoreham's harbour arms and try to swim to the other.  In those cases no amount of guidance can reduce the risks for they are jumping into the entrance of a busy commercial port and the exit of the tidal Adur river.
Back in summer 2010, I spoke to Barrie Turner, the NCI's Station Manager at Shoreham about the particular dangers to those tombstoners who try swimming across the harbour mouth. 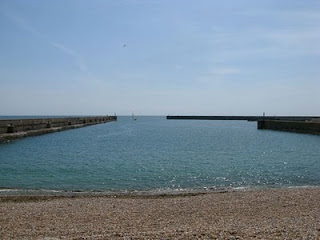 "Assuming they land safely, the distance between the harbour arms is deceptive and swimmers cannot swim straight across the harbour mouth due to a combination of tidal and river water flowing in and out.
They are therefore forced to swim in a horse-shoe shape, increasing the distance they have to cover, exhausting themselves, and leaving them exposed to danger for longer. Thus, in reality a quick fun dash across the harbour mouth is really a long, slow, dangerous slog.

On average a swimmer swims at 2 knots. Commercial vessels travel at 6 knots. They may look slow on the horizon, but certainly not close up.  Jet-skis can travel at 60 knots. A swimmer is too slow to swim out of the way of either.
Also, once in the water, swimmers look just like flotsam. Boats don't often sail around flotsam; they sail over it.
If a skipper of a fishing boat, for instance, realises that what's ahead of him is not flotsam but a swimmer, he may take evasive action by slamming the engine into reverse. Sadly that can suck the swimmer into the engine's propellers.
Even if a swimmer reaches the other side safely, they either have to swim back across the harbour mouth, or face a 3 mile walk to collect their stuff."
Shoreham Port tries to discourage tombstoning by educating local school children about the inherent risks, but some will do it regardless, presumably on the basis that accidents happen to other people. I say don't chance it. Do the hobble, and gasp instead. It may not look cool, but it's a lot cooler than visits to hospital, or worse still, a crematorium.
NEXT WEEK I hope to bring you another in the series of a day in the life of. I know I've been promising for weeks and I assure you, it'll be worth the wait.
Thanks for dropping by and see you soon.
Ta-ra for now.

This blog was based on an earlier blog "Tombstoning= natural selection at work" published on 9th July 2010.
Posted by Liz Coward at 11:57